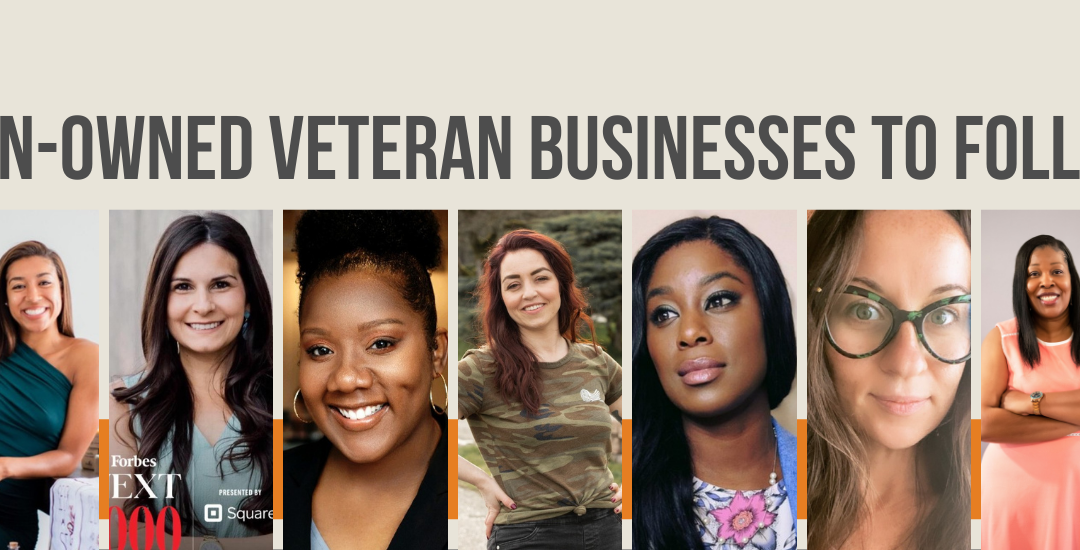 For over a year, Bunker Labs’ Transition Podcast has been demystifying the entrepreneurial journey for Veterans and military spouses. Thanks to generous support from MetLife Foundation, host “Iron” Mike Steadman is able to reach out to real entrepreneurs and talk about their triumphs, tragedies, and the lessons they’ve learned along the way.

To celebrate Women’s History Month, we’re looking back at some of Mike’s favorite interviews with women entrepreneurs over the past year. 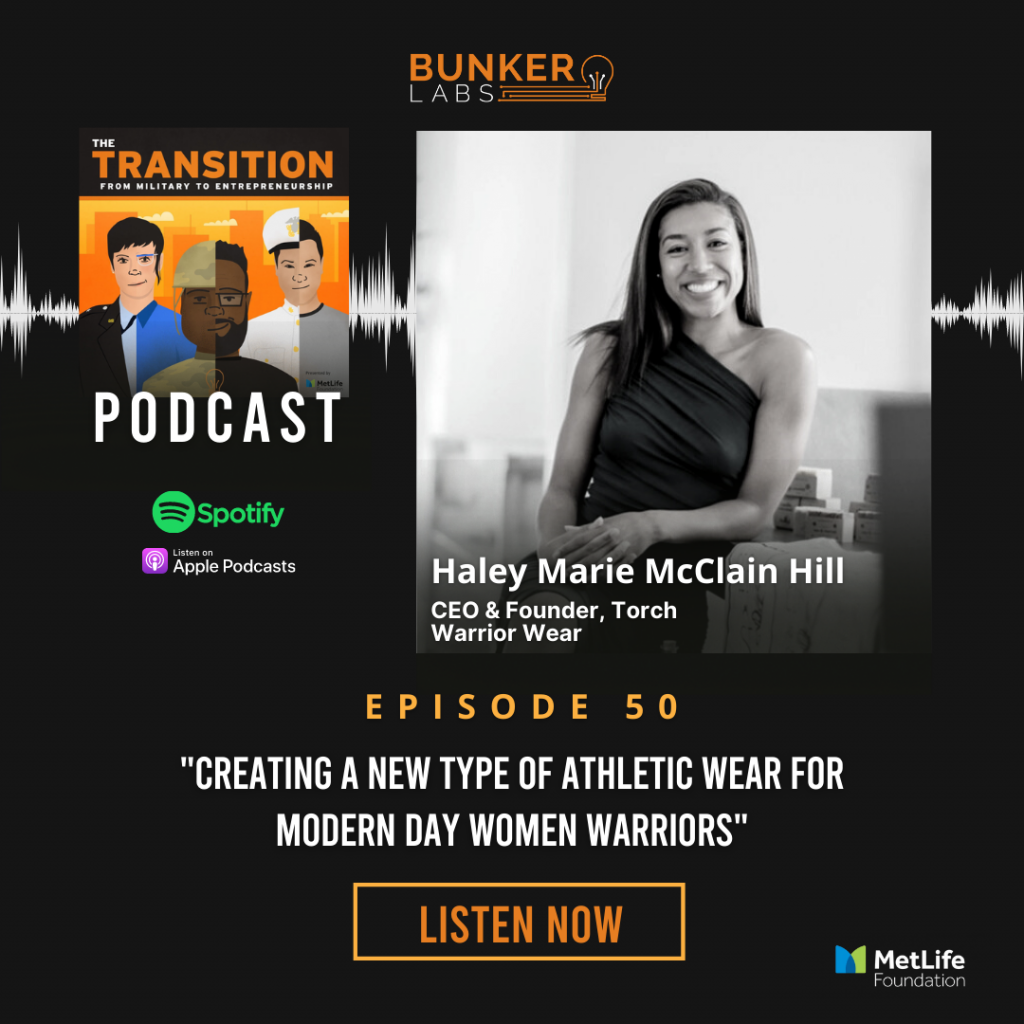 On this episode of the Transition, we are joined by NFL Cheerleader, entrepreneur, and soon-to-be transitioning Air Force officer. Hailey founded Torch Warrior Wear, an L.A.-based clothing brand for modern-day women warriors in the armed forces. On the show, we learn about her entrepreneurial journey and discuss some of the challenges she’s faced along the way. Pick up your own Torch Warrior Wear here. 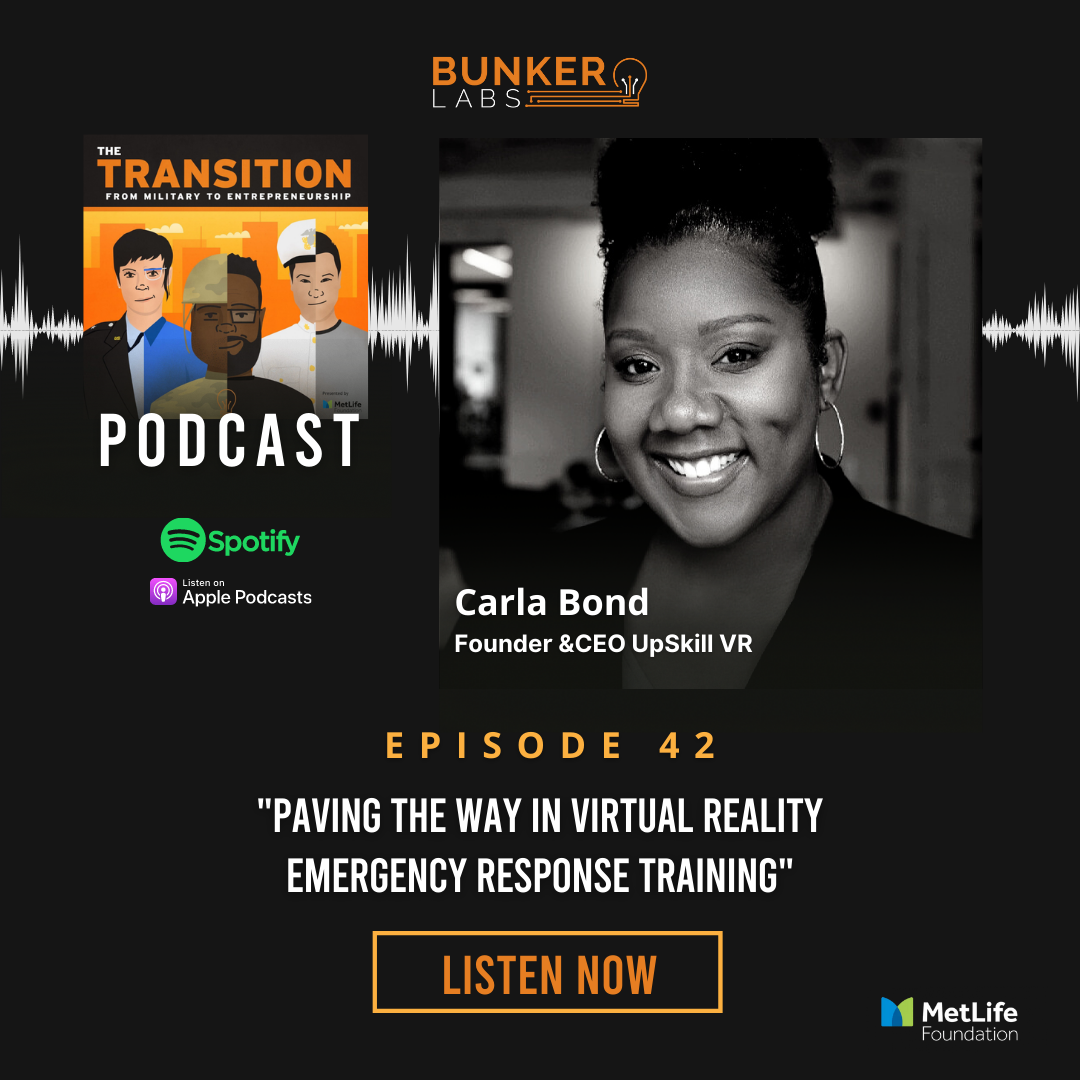 A former US Navy police officer and medic, Carla Bond founded Upskill VR after teaching herself the basics of virtual reality development. On the podcast, we discuss what led to founding UpSkill VR and the many pitfalls that almost tanked her business. Carla shares the process she used to transition from a small business to a start-up, and licensing her Upskill VR technology to train the next generation of first responders. 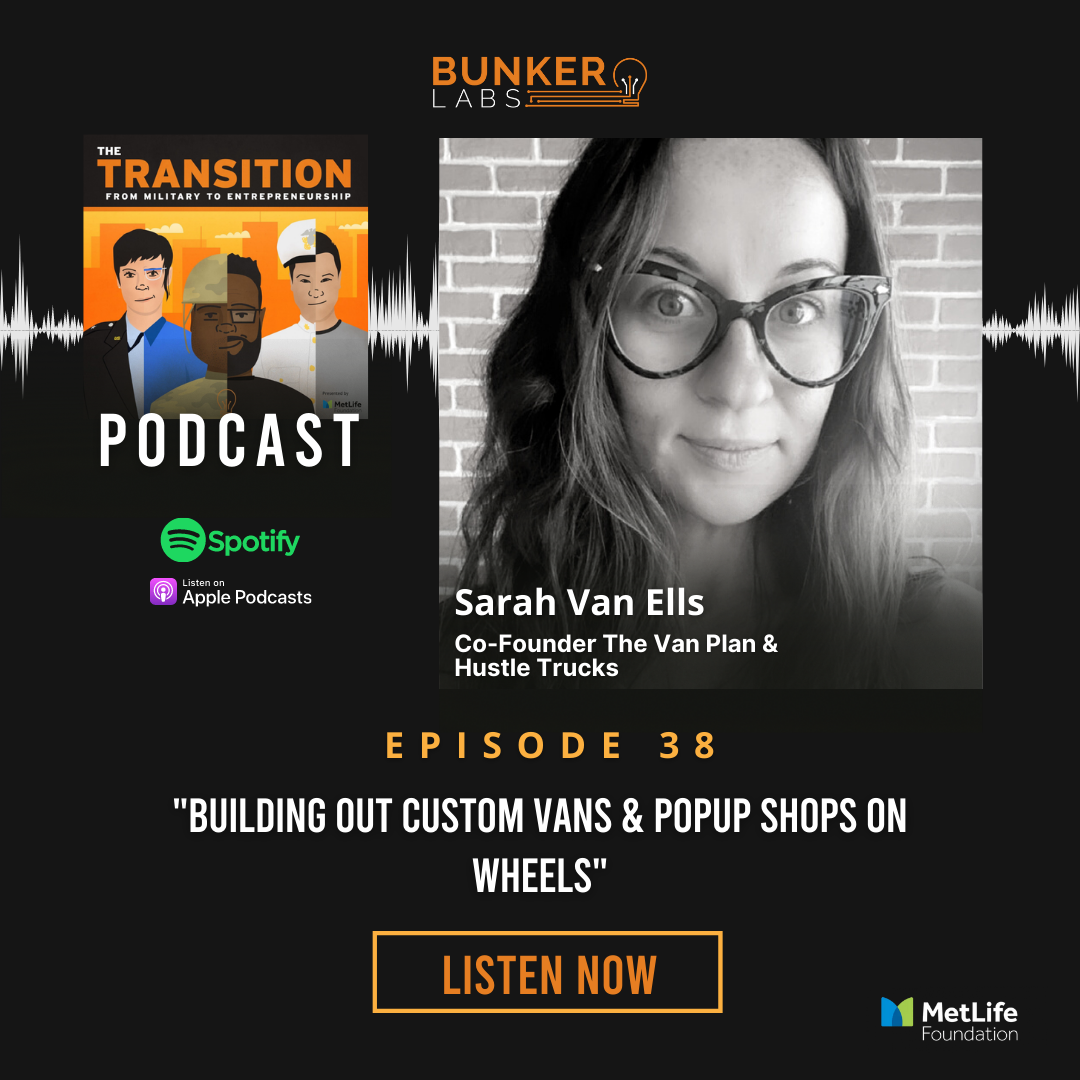 We are joined by Sarah Van Ells, military spouse and co-owner of The Van Plan, a company that builds custom vans accessible for everyone. Sarah opens up about running The Van Plan with her husband and how they’ve expanded their offerings into a new line of business called Hustle Trucks. 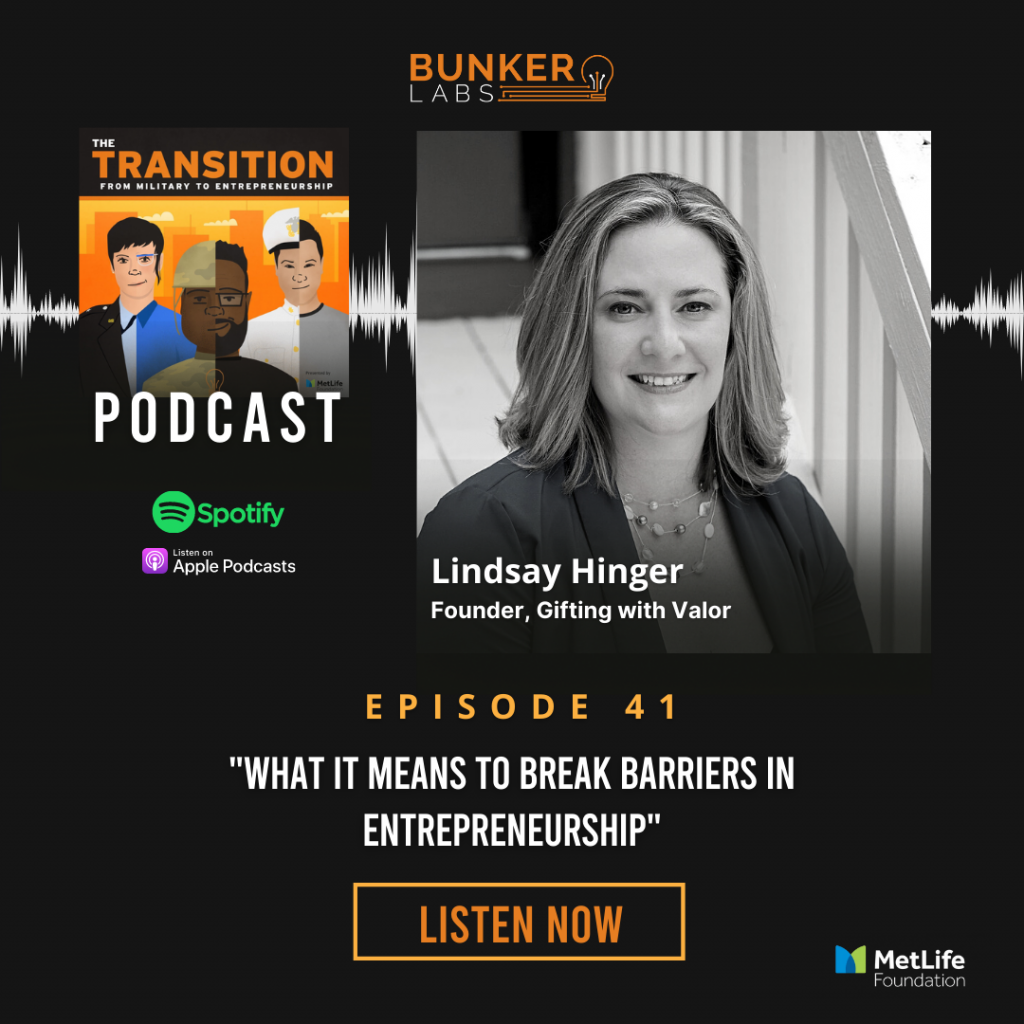 On this episode, we talk with Lindsay Hinger, Founder of Gifting With Valor, a business that specializes in sourcing and distributing curated gifts from Veteran and military spouse-owned businesses. Lindsay opens up about her challenges dealing with mental health and the complexity of running a subscription box business. Check out her subscription boxes. 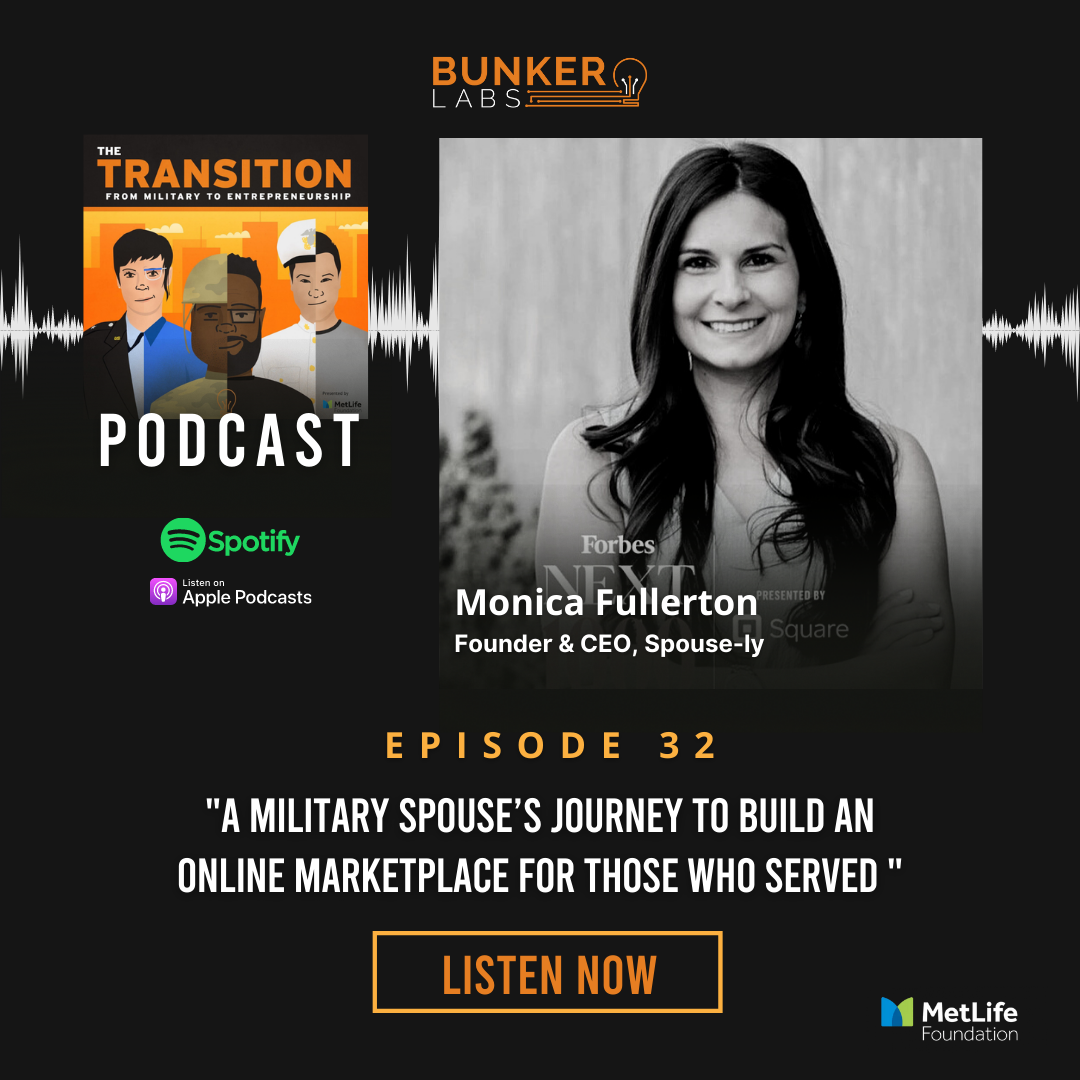 Episode: A Military Spouse’s Journey to Build an Online Marketplace for Those Who Served

In today’s episode we hear from Monica Fullerton, Founder & CEO of Spouse-ly. Monica is a military spouse on a mission to build a one-of-a-kind marketplace with goods made by military spouses, first responders and Veterans, enabling people to shop small, shop virtually, and make a big impact. Buy goods from families who give. Shop today. 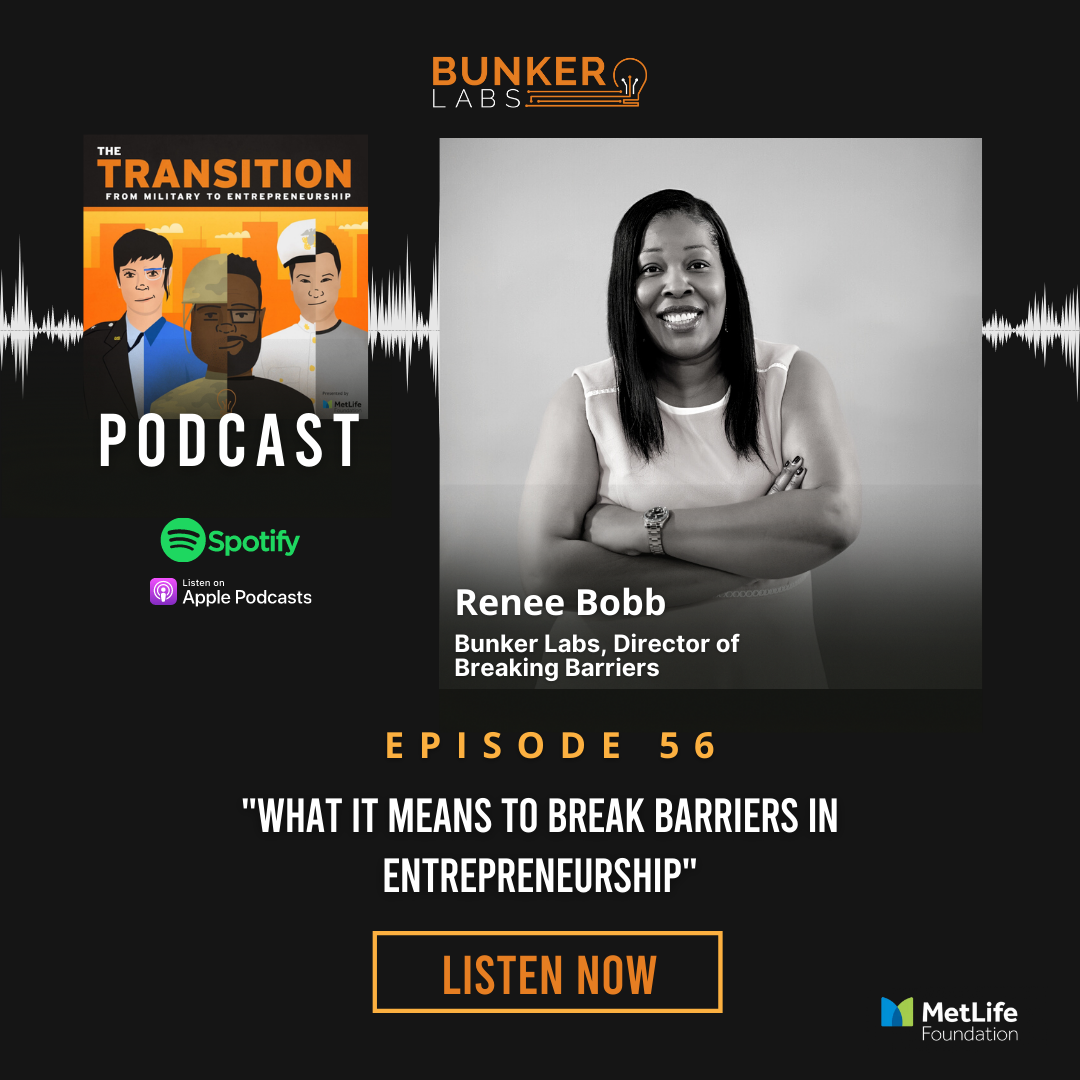 Episode: What it Means to Break Barriers in Entrepreneurship

On this episode, we are joined by Navy Veteran and serial entrepreneur, Renee Bobb. Renee runs Bunker Labs’ Breaking Barriers in Entrepreneurship workshop series. The 8-week workshop series is for those who have historically been underrepresented in the startup space. Learn more about the workshop series on this podcast episode. 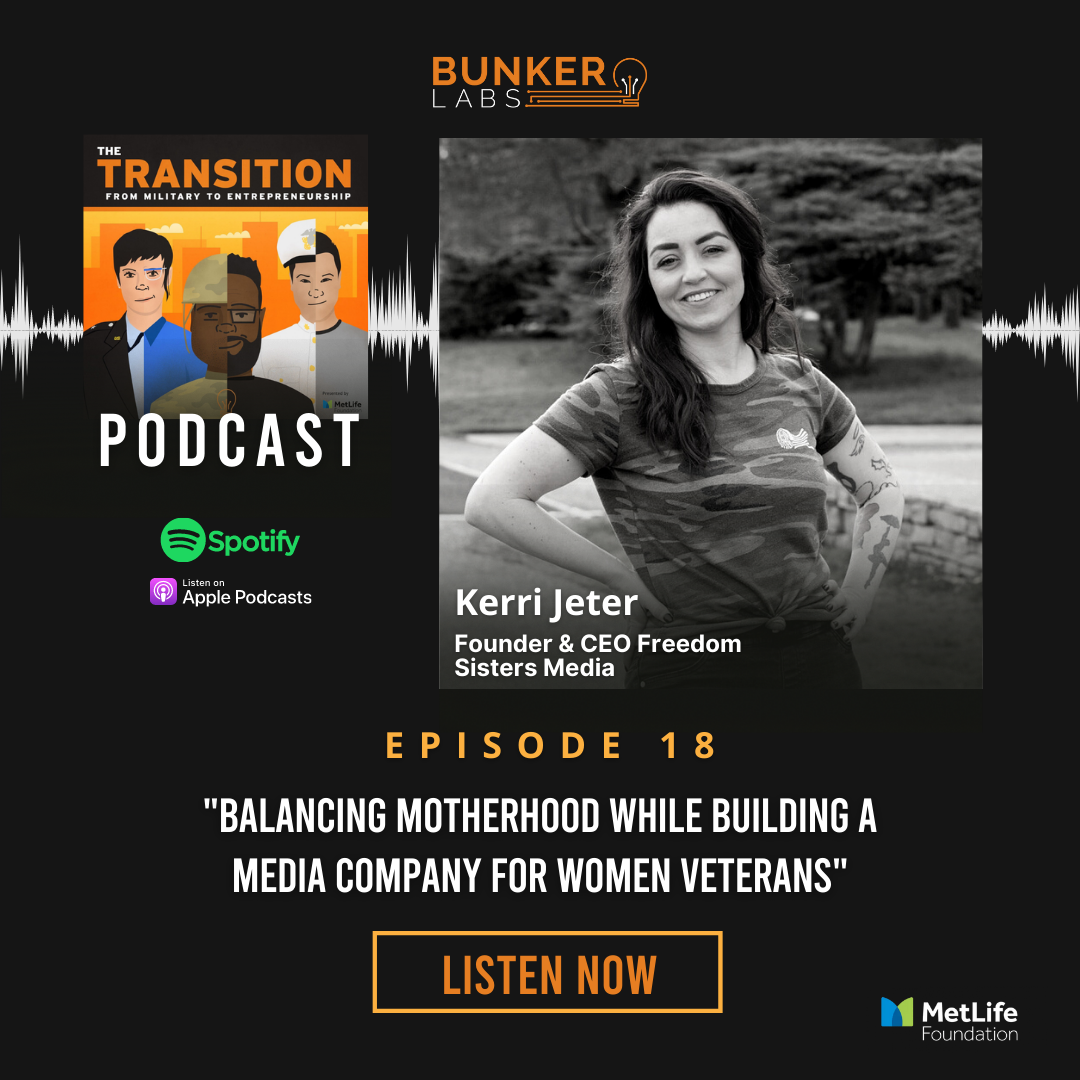 How do Army Veterans juggle military life and family? Army Veteran and  Founder/CEO of Freedom Sisters Media, Kerri Jeter explains. This mother of eight and 2015 Ms. Veteran America winner knows a thing or two about how to keep everyone sane at home. Listen today and learn more about her media company. 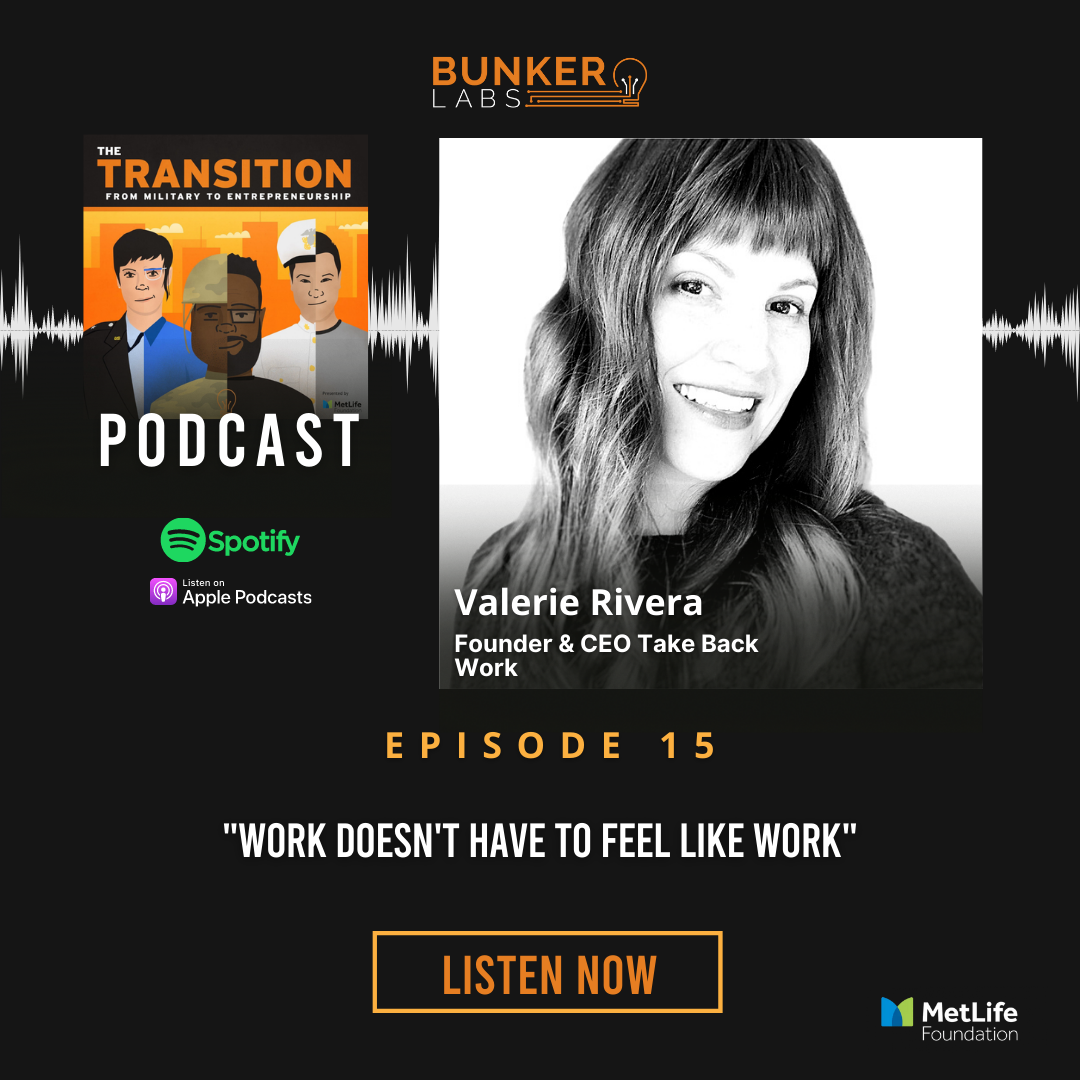 Does work have to feel like work? Nope. Learn how retired Air Force Veteran Valerie Rivera launched her business while being a wife and mother of two teenage boys. This episode isn’t for the faint of heart, but ideal for those who are trying to juggle life and entrepreneurship. Listen to the episode and learn more about how you can Take Back Work. 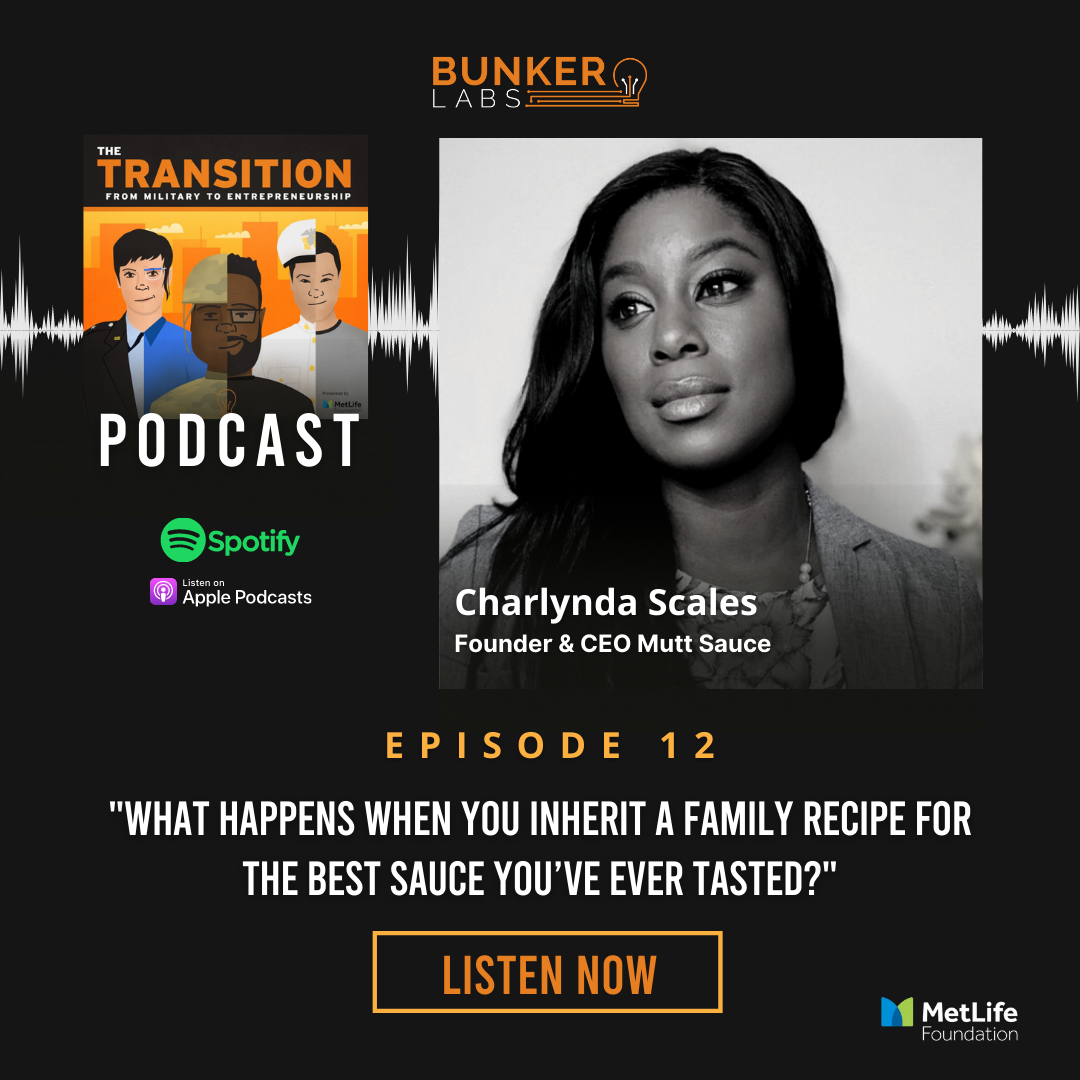 Episode: What happens When You Inherit a Family Recipe for the Best Sauce You’ve Ever Tasted?

Charlynda Scales is an Air Force Veteran and CEO of Mutt’s Sauce, an all-purpose specialty sauce company founded in memory of her late Grandfather, Charley “Mutt” Ferrel Jr., who made the coveted sauce. In 2013 Charlynda decided to draw on her military experience and business background to launch the business and distribute the sauce across the United States. On the Transition, Charlynda opens up about her struggles with imposter syndrome and the challenges of running a small business.

About The Transition Podcast 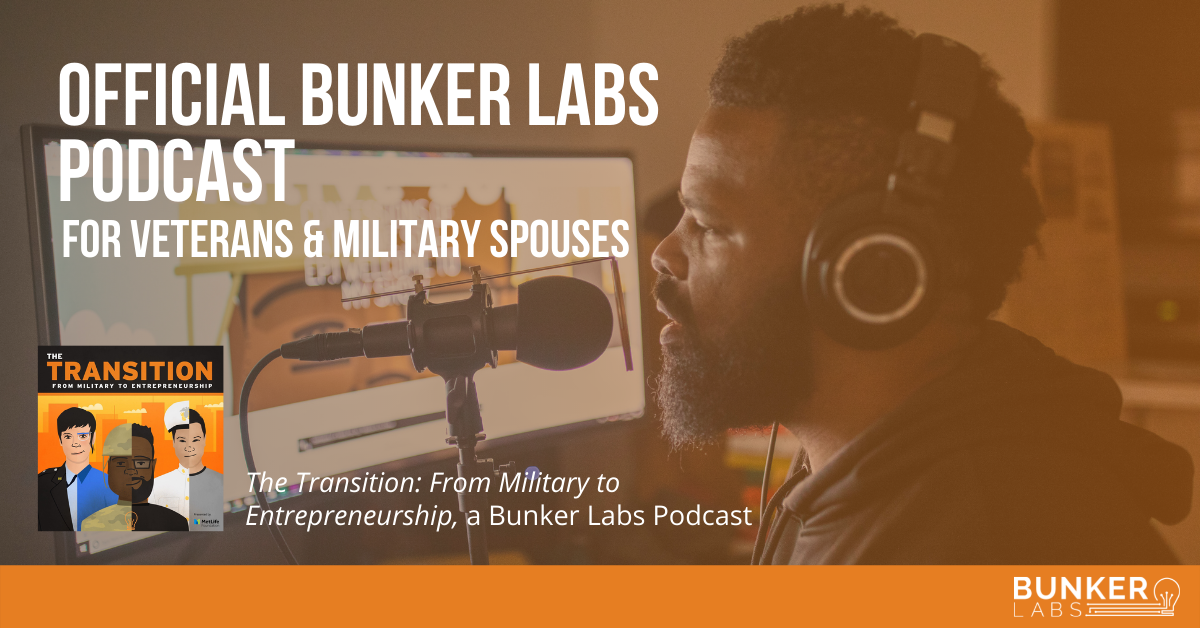 “Iron” Mike Steadman interviews veterans and military spouses with businesses and startups from all industries and stages. Listen each week to dive deep into their stories and lessons learned. New episodes drop on Thursday. Sign up for the newsletter and never miss an episode.

Mike is a three-time National Collegiate Boxing Champion from the United States Naval Academy and Marine Corps Infantry Officer, with deployments to Afghanistan and Japan/Philippines. He’s currently a Hoover Veteran Fellow at Stanford University’s Hoover Institution, a public policy think tank promoting the principles of individual, economic, and political freedom. His goal is to raise 1.5 million dollars to build the first ever IRONBOUND Courage Academy, a 5,000 sqft boxing facility and small business incubator space for Newark’s youth and young adults. Through his efforts growing IRONBOUND Boxing and IRONBOUND Media, Mike has established himself as a high profile veteran advocate and the new face of social entrepreneurship.