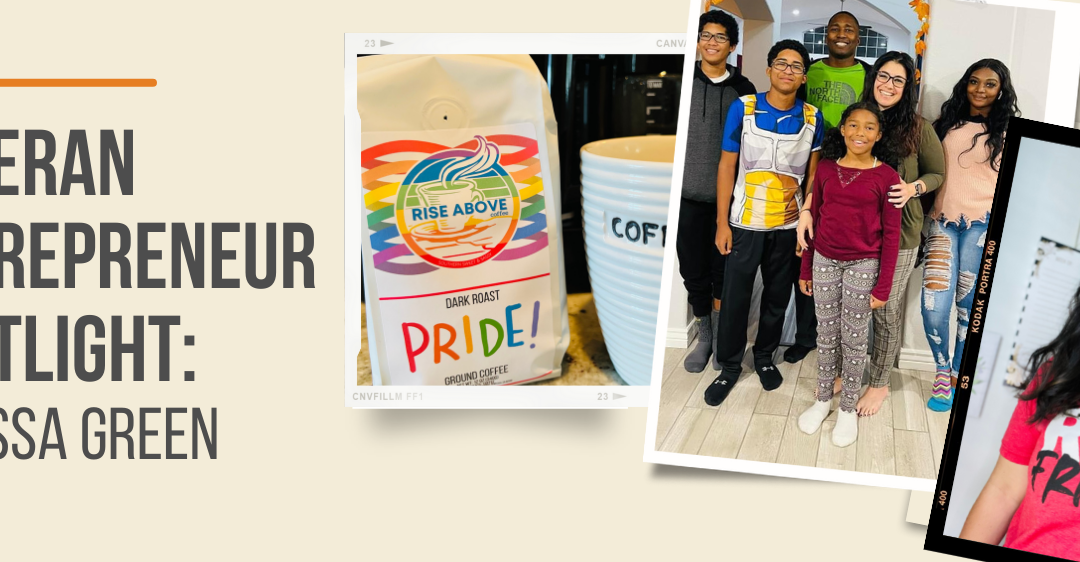 You drink coffee. Maybe a lot of coffee. Maybe you can’t even start your day without it, or maybe that 2 PM cup is all that keeps you awake through your team’s too-frequent virtual huddles. Maybe you just like a little coffee with your cream and sugar to make sure you don’t fall asleep once you finally find time to binge that new series you’ve been excited about. Whatever the particulars, coffee is part of the mix that gets you through your week.

If you’re going to spend money on coffee anyway, wouldn’t it be nice if you were supporting causes or communities you believed in while you drank? Badass Coffee Causes sells delicious, premium coffee and accessories and donates a portion of proceeds to support two different organizations each month benefitting the military family and LGBTQ+ communities.

Want your coffee money to make the world a better place while keeping you caffeinated? Thanks to Melissa Green’s Badass Coffee Causes, it can!

Melissa enlisted in the US Navy in 2001 as a Torpedoman’s Mate.  She was just in “A” School learning her trade over the events of 9/11. She was sent to Advanced Undersea MK-46 Maintenance Weaponsman “C” school (NEC 0746) based on her academic performance, which sent her to Washington state before transferring to her first duty station. Melissa served aboard the USS O’Bannon (DD-987) out of Mayport, Florida, which was the last Spruance-Class Destroyer to serve the US Navy until it’s decommissioning in 2005. After crewing the ship for a workup cycle, she transferred to Ewa Beach, Hawaii, maintaining and banding torpedoes at NavMag Pearl Harbor for use on helicopters.

Melissa met her future husband in Hawaii, and separated from the Navy after her tour, transitioning to the life of a military spouse. She moved from Hawaii back to Washington, living there about eight years. Her husband’s ship then had a homeport change to Hampton Roads, VA. However, to avoid what could have been an isolating experience, Melissa set up home in North Carolina, where she had some friends and family. Her husband retired in 2015, and they recently relocated from NC to Phoenix, AZ.

Today’s BadassCoffeeCauses.com has changed a lot in less than two years. The concept of selling coffee to support charitable organizations all started in January of 2021 with Southern, Sweet, and Sassy Coffee (S3 Coffee Co), which sells “roast to table” coffee to support military families. Each month, S3 Coffee spotlights a different organization working to make military family lives better, and at the end of the month, donates a portion of the proceeds to that organization.

Melissa had earned her MBA from Columbia Southern University in 2018, and assumed that would be enough to launch her venture, put up a website, and get some social media traction going. She aspired to build something large enough to quit her day job, and maybe have something she could pass on to children. While she had some early success, it became rapidly apparent that she needed a community’s worth of advice and assistance to get from where she was to where she wanted to be.

Thanks to word of mouth, Melissa heard about Bunker Labs and signed up for our Veterans in Residence (ViR) program, participating in the ViR 21B virtual cohort. Melissa instantly recognized the value of our community and programming. She found it forced her to re-examine her venture’s fundamentals, and strengthen those foundational elements to better grow. Networking with the Bunker Labs community has also led to finding numerous contractors and partners, which have helped business thrive.

At the end of the first cohort, she immediately reapplied to be in ViR 22A, and also participated in our Breaking Barriers in Entrepreneurship workshop twice, completing the women and the Latinx workshops. Since joining the Bunker Labs community, Melissa refined her business model, and then duplicated it for a new venture in January of 2022 with Rise Above Coffee, this time serving organizations that support the LGBTQ+ community. It wasn’t long before she brought both ventures under one roof with BadassCoffeeCauses.com, streamlining her efforts.

“The connections I’m making this year at Bunker Labs are going to fuel tremendous growth for next year. The new contacts and networks, and the partnerships that have resulted have already proven invaluable.”

Melissa recently began her third round of Veterans in Residence (ViR), this time in-person with the Phoenix cohort. It’s keeping her energized and accountable as she balances her day job with taking Badass Coffee Causes to new heights. She’s expanded her offerings, both in the different blends and roasts available, but also adding different ways to buy and enjoy her coffee, like K-cups, and accessories like mugs and coffee makers. But most importantly, by the end of the year, her venture will have donated proceeds to 24 different organizations that serve either military families or the LGBTQ+ community.

Melissa has already begun the process of vetting next year’s charitable partners, and is excited to showcase organizations supporting the military family and LGBTQ+ communities. She’s also open to outside nominations for organizations, particularly if you run the organization or have a point of contact you can connect her with.

Are You Ready to Take the Next Step?

Supercharge your own entrepreneurial journey today with Bunker Labs! Our Veterans in Residence Program takes applications every September for the January cohort and March for the July cohort. Grow your regional network and face the challenges of entrepreneurship alongside fellow veteran and military spouse entrepreneurs. Bunker Labs’ Breaking Barriers in Entrepreneurship workshop is also accepting applications for its Asian, Black, Latinx, and women cohorts. Learn more about each program and apply today!