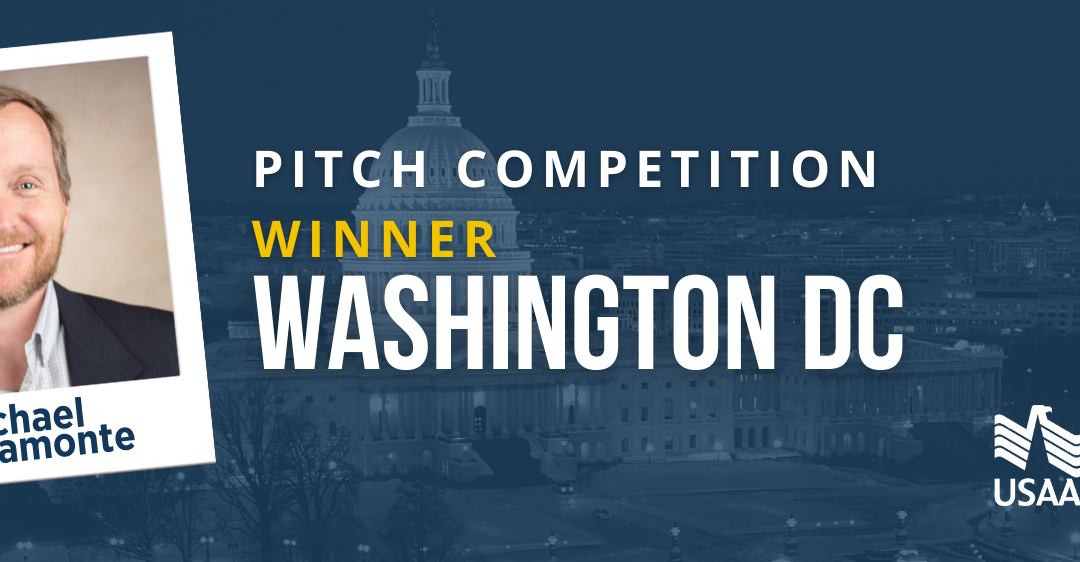 On May 26th 2022, in Washington DC, the third of six regional pitch competitions will commence, continuing USAA’s 100th Anniversary Pitch Competition, hosted by ID.me. Eight companies will compete for $10,000 in prize money and a place on stage at the San Antonio finals where they can compete for the grand prize of $100,000.

Michael Chiaramonte and Duality Systems, Inc beat out 120 other Washington DC applications to take home the top prize of $10,000 for their scheduling software aimed to streamline military and health care operations. Duality beat out seven other participants, but each pitch had judges engaged and offering one-on-one feedback at a later date. It also led to great networking connections for all participants. James Chapman’s ClaimEdge insurance claim litigation management software took home second prize and $5,000 in prize money. While Duality Systems has a guaranteed seat at the Finals in San Antonio, Tx this November, the other competitors still can earn a wild card spot!

The event also featured a fireside chat between Moonshots Capital CEO Kelly Perdew and Blake Hall, the founder of ID.me, our host for the event. ID.me is an innovator in the field of online identity protection, enabling users to safely access government, healthcare, and financial services online. They’ve already collectively saved real people millions of hours at the DMV updating their existing government ID to a Real ID. Together, they discussed the importance of making sure the people you hire at the entry level are represented by those in leadership to protect morale and company culture. They also discussed the importance of staying focused on end-user pain points not just on your product, but your value propositions, business metrics, and everywhere else.

Want to Be on Stage Next?

Applications open May 16th for the Seattle Regional Pitch Competition until June 6th. Apply today, or fill out an interest form for the last regional event in Charlotte to take your shot at $100,000 in funding.

Pitching under ideal circumstances is difficult, but pitching for a competition is even more intense. Take another look at your pitch with Bunker Labs How-To Pitch Your Business blog series.

Judges will hear business pitches from eight US military Veterans or eligible family members. Each competitor has just five minutes to make their pitch, followed by a five-minute Q&A with the judges. 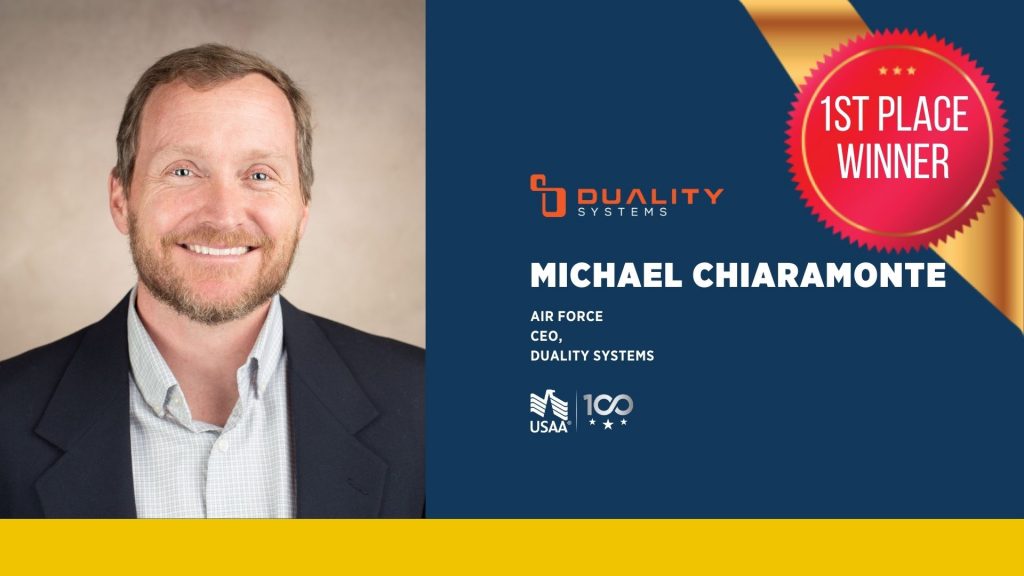 Duality Systems is an energetic team of healthcare professionals, data scientists, and technologists who recognize an acute need to revolutionize scheduling and processes to reduce employee burnout and turnover by improving everyone’s work-life balance. 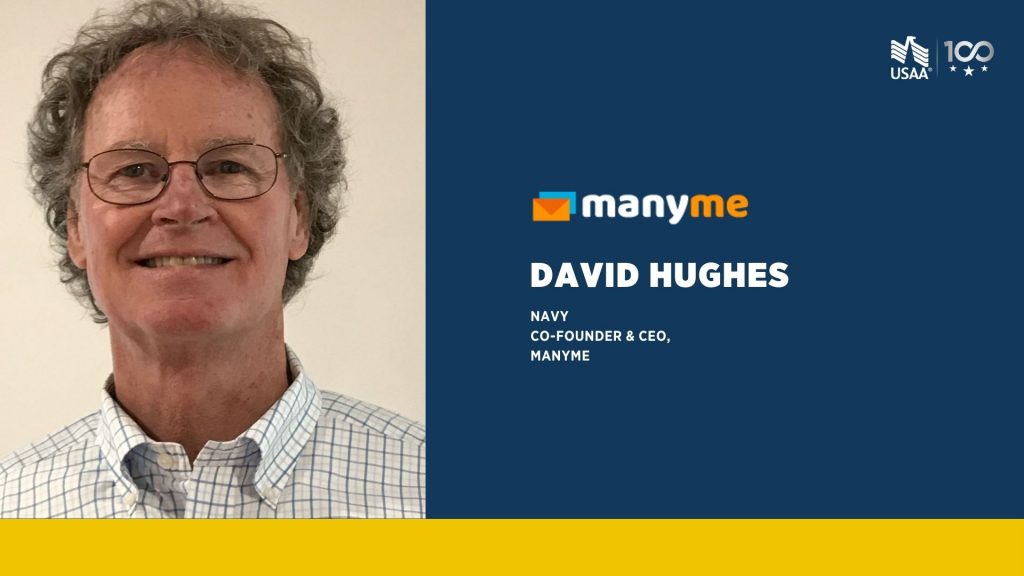 ManyMe is a free online service that reinforces your primary email system with powerful new capabilities. ManyMe gives individuals greater privacy, security, and control in their online lives. ManyMe’s work is based on the team’s years of experience in email security. The CEO’s last company provided email security services to small and mid-size businesses through a vast channel of managed security services providers, and was acquired by Sophos, a global leader in cybersecurity. 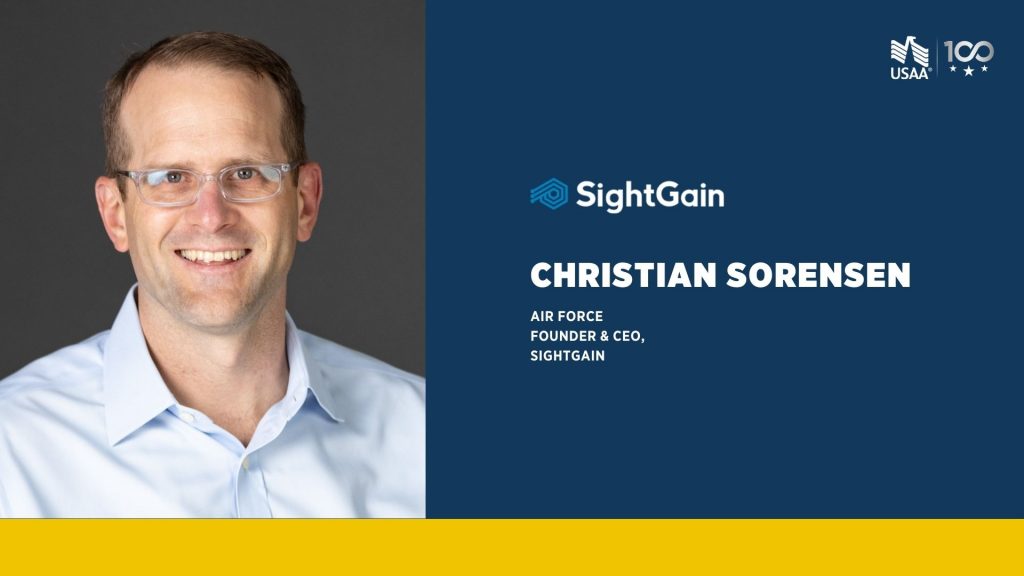 SightGain helps cybersecurity leaders know their investments in people, process, and technology are working against the dynamic threats they face and makes actionable recommendations when they are not. SightGain has created an objective, repeatable, and measurable approach to ensure SOC readiness. It’s the industry’s first platform that verifies defensive performance with real-world attack simulations. The SightGain Readiness Platform puts you in the driver’s seat for making airtight security decisions. 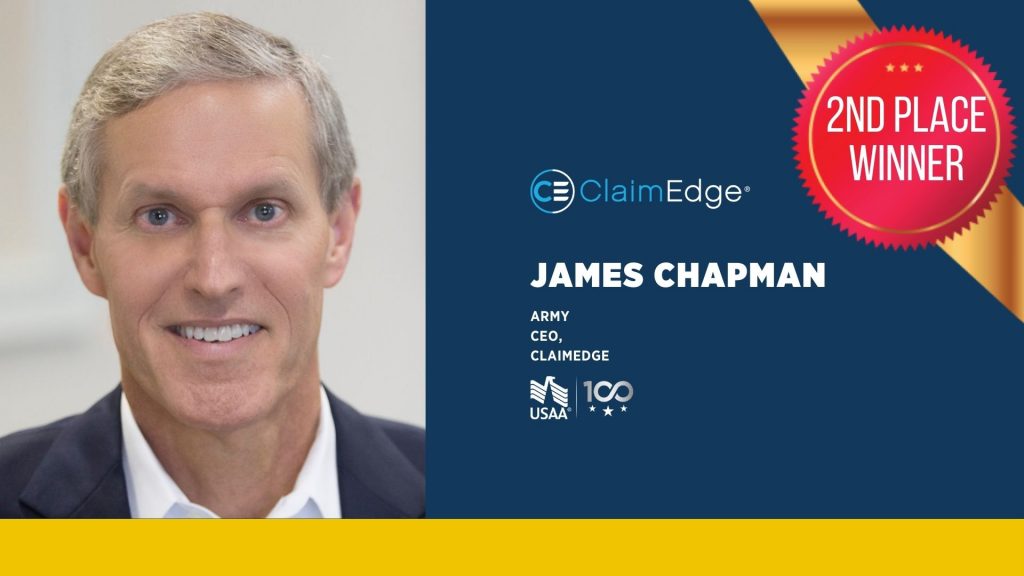 ClaimEdge removes the complexity of managing P&C insurance claims litigation, helping carriers resolve lawsuits faster and at lower cost. ClaimEdge® gives litigation managers powerful collaboration and workflow tools that surface strategic insights to make early case resolution decisions, reducing payouts and legal expense. On the backend, it functions to capture, validate, and tag the litigation work data as it is being developed during each lawsuit for efficient use by data science teams. 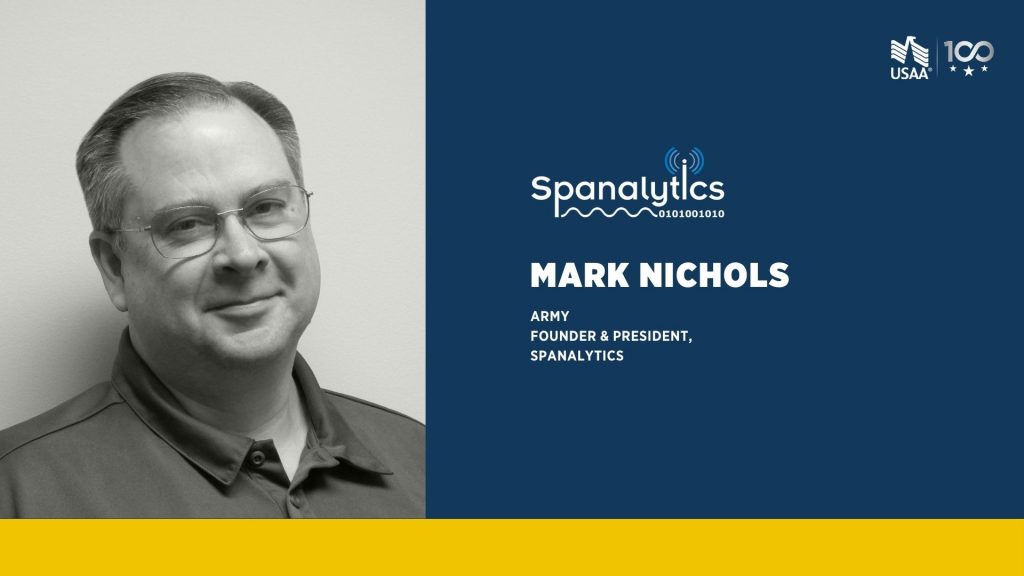 Helping customers understand and secure their connected world. Founded in 2002, Spanalytics is a proven leader in providing custom Bluetooth applications and products, training, and support services. 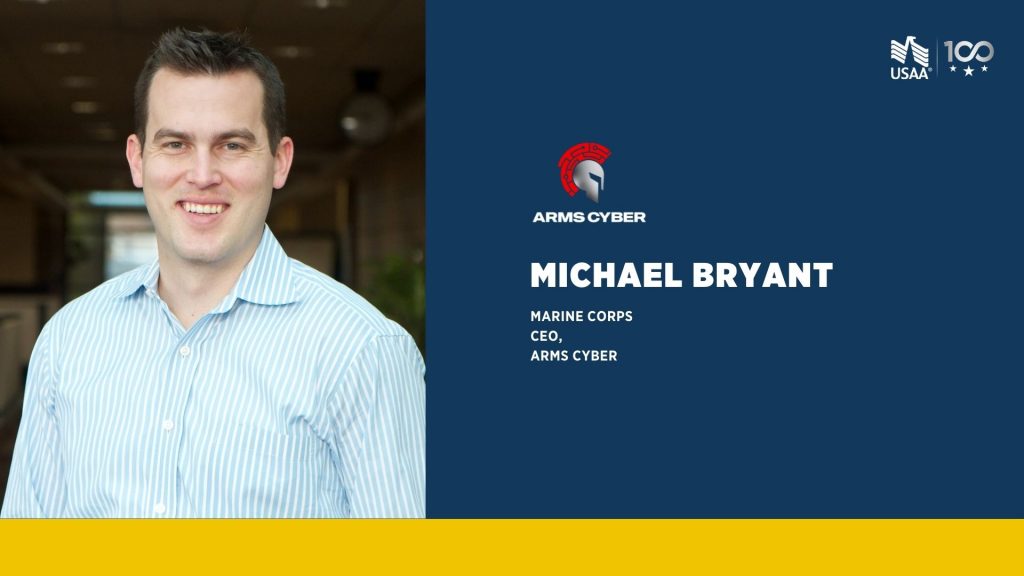 Protecting mission-critical software and network systems with best-in-class proactive cyber security solutions. We focus on prevention and reconfiguration and fix the root problem of a system before an attack. Resilient and Adaptive. By using our approach, data integrity can be maintained, and critical business software can become un-hackable, dynamically adjusting and self-healing based on adversary behavior. Learn more about ArmsCyber. 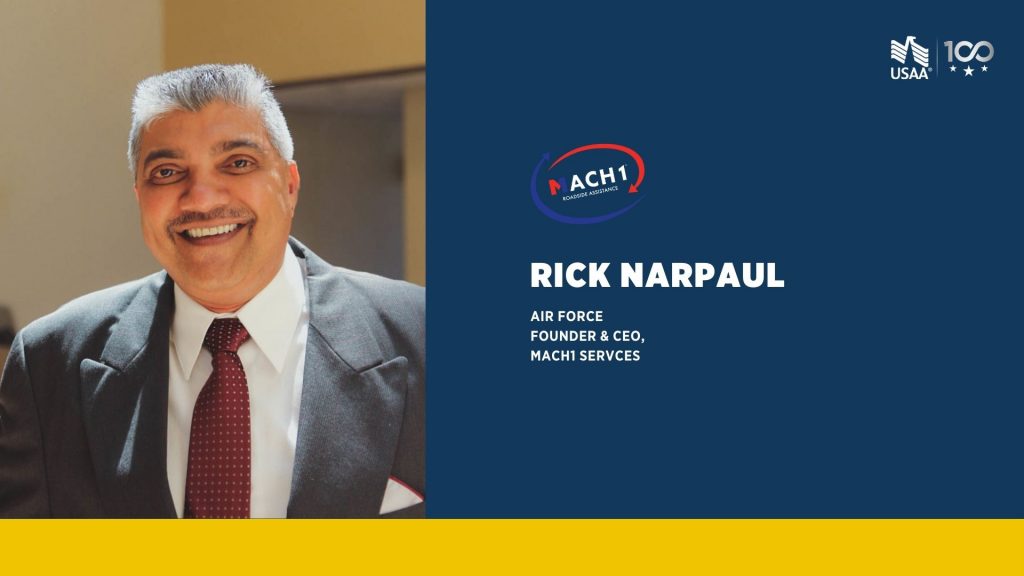 Mach1 is the first on-demand phone app to truly automate and digitize the roadside assistance industry. Mach1 eliminates the dangers & frustration of the current model & digitizes roadside assistance via a phone app. We offer the broadest array of providers with the skills to perform the services needed. 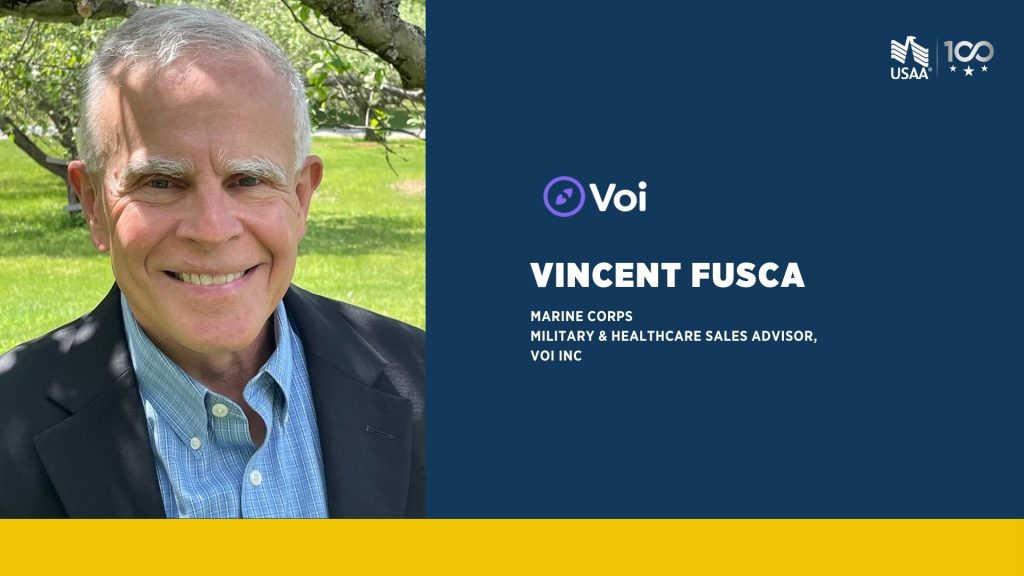 Voi Detect is the only validated screener to detect near-term risk. It takes 2 minutes to complete, “learns” over time using AI, requires no expert training, and is as accurate as a psychiatrist. Voi Reach combines AI, science, technology, and compassion to continuously monitor individuals at risk for suicide and immediately provide assistance. We sell to hospitals, military/VA, corrections, and have plans for international expansion.

Our judges have the unenviable task of listening to eight pitches and selecting a winner to take home $10,000 and a spot in the finals, as well as a runner-up, who takes home $5,000. 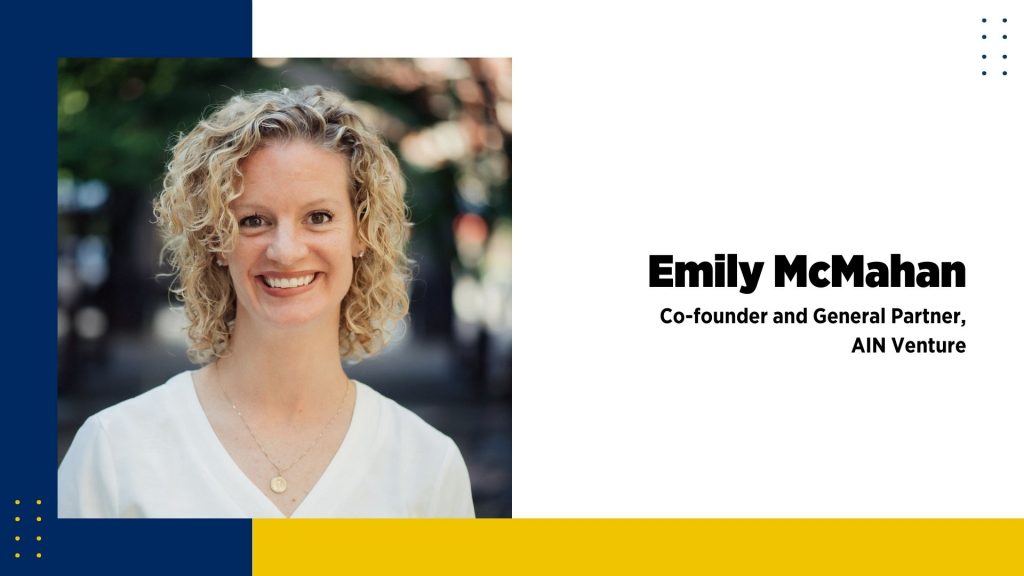 Emily McMahan is a co-founder and General Partner at AIN Ventures, a venture capital firm that invests in early-stage companies at the intersection of deep tech and dual-use technology, as well as in military veteran-led startups. The fund is supplemented by an investment syndicate and community called the Academy Investor Network, built to harness the collective experience and service of graduates from the five publicly-funded U.S. service academies. Previously, Emily served as the Founder / Executive Director of Capitol Post, a business incubator that taught military veterans and their spouses how to think and act like entrepreneurs. Capitol Post was also the home of Bunker Labs DC, a national 501(c)(3) organization network of military veteran entrepreneurs dedicated to helping the military-connected community start their own business.

Before starting Capitol Post, Emily was a partner and CFO at a successful startup technology firm serving the federal government. Emily holds an MBA from the University of Virginia’s Darden School of Business and a Bachelor of Science degree from the United States Military Academy at West Point. She currently serves as the Co-Chair of the Board of Advisors for the Common Mission Project and serves on the DAV National Veterans Entrepreneurship Council. Emily lives in Arlington, Virginia, with her husband and three children. 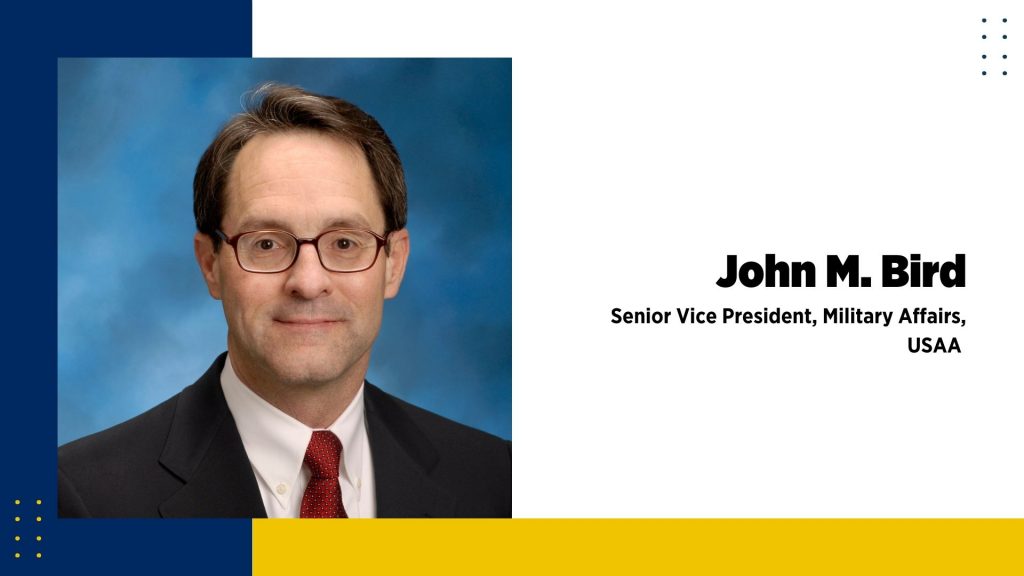 John joined USAA in February 2013 as the Senior Vice President of Military Affairs. He leads the USAA Military Affairs Team comprised of more than 50 retired officers and senior noncommissioned officers who advocate for and support our military including those currently serving, our veterans, and military families. His team of professionals, geographically disbursed across the nation, represent each of their services as well as the nation’s Guard and Reserve forces. They are responsible for creating and sustaining relationships between USAA, strategic partners, military leaders, and military-related organizations allowing USAA to better serve and advocate for the military community. He and his team promote the USAA brand and reputation through face-to-face and virtual engagements, creating an enduring bond with the military community USAA serves.

In 1977, he graduated from the U. S. Naval Academy with a Bachelor of Science in Mechanical Engineering. He holds a Master of Science in Engineering Management from the Catholic University of America and has completed the Massachusetts Institute of Technology Seminar XXI in Foreign Affairs, International Relations, and National Security.

John has been married to his high school sweetheart, Nonie, for 40 years. They have two grown children, Jack and Elizabeth, who are both UVA Engineering graduates. They are also blessed to have 2-year-old twin granddaughters Nell and Zoey. 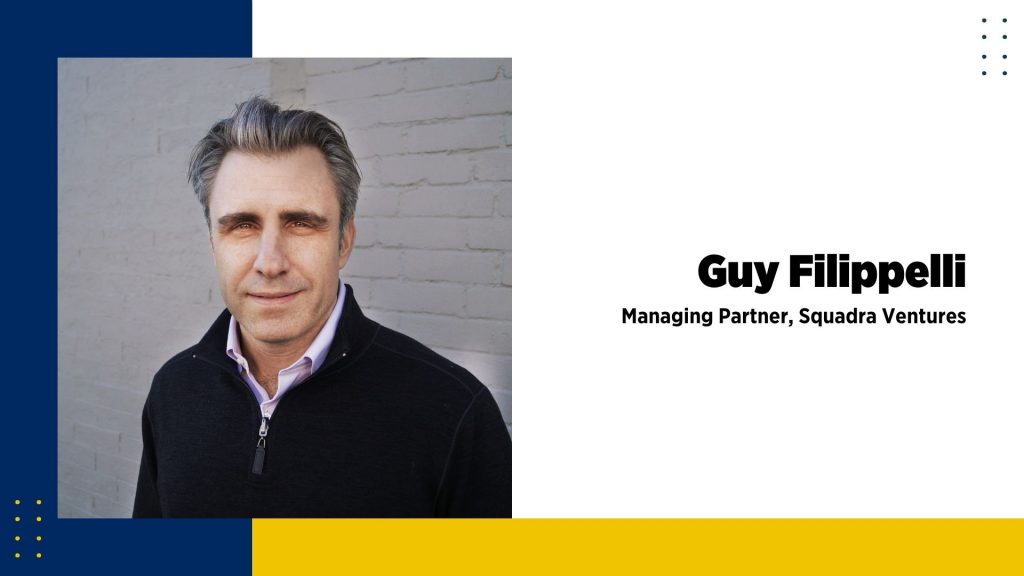 Guy Filippelli is the Managing Partner of Squadra Ventures, an early-stage venture capital firm that makes concentrated, lead investments into early-stage companies in the National Security and Cybersecurity markets. He was previously the founder and CEO of RedOwl Analytics and Berico Technologies. He began his career as a US Army intelligence officer, serving in Korea, Italy, Germany, and Afghanistan, and at NSA where he served as a Special Assistant to the Director, and led a highly successful project in Baghdad. In 2007, Guy received the National Intelligence Medallion, the nation’s highest award for civilian personnel, for his efforts to bring real-time targeting capabilities to our tactical forces. He is a graduate of the United States Military Academy (USMA) at West Point and received his B.A. and M.A. in Philosophy, Politics, and Economics from Oxford University, where he studied as a Marshall Scholar.

He is Chairman of the Commit Foundation, a non-profit focused on veteran transition, and also serves on the boards of the National Cryptologic Foundation and the University of Maryland’s BioPark. He is a proud husband and father, is passionate about making an impact in Baltimore and beyond, and enjoys making time for cooking, Italian genealogy, and golf.

Want to Pitch Your Business?

Remember, applications are open for the Seattle Regional Pitch Competition from May 16th until June 6th. Apply today or fill out an interest form for our last regional event in Charlotte to take your shot at $100,000 in funding. Check out the Austin and Los Angeles pitch competition winners and imagine yourself as the winner of the Seattle competition!