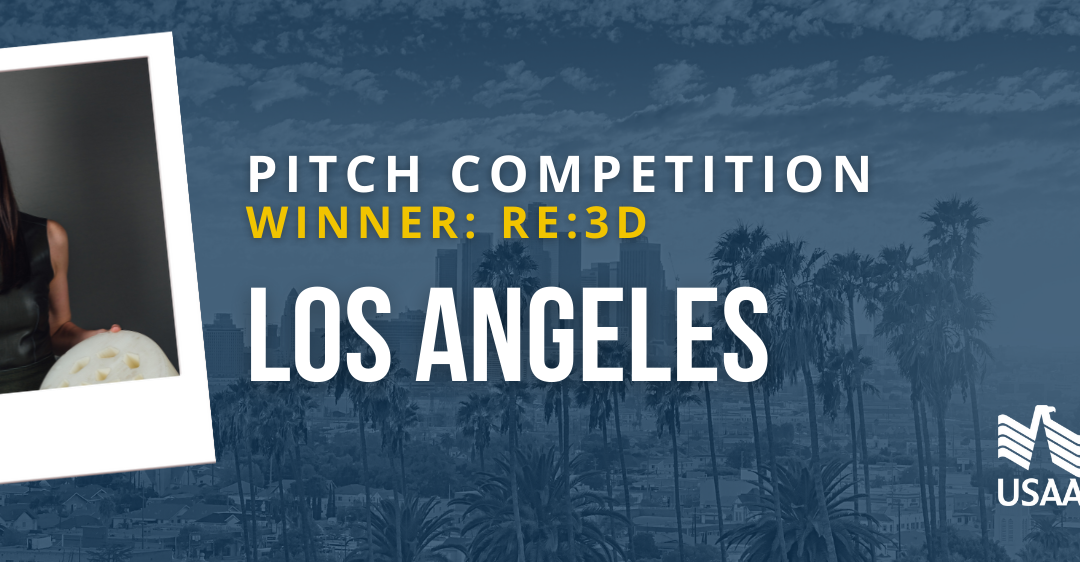 On April 21, 2022, in Los Angeles, California, the second of six regional pitch competitions will commence, continuing USAA’s 100th Anniversary Pitch Competition. In Los Angeles, six companies will compete for $10,000 in prize money and a place on stage at the San Antonio finals. There, they can compete for the grand prize of $100,000!

Samantha Snabes and re:3D, Inc beat out 75 other Los Angeles applications to take home the top prize of $10,000 for their industrial 3D printing venture with an eye toward sustainability. Her victory came after six pitches judges described as strong, crisp, and from a diverse range of industries. Lauryn Torch’s Native multi-lingual messaging platform took home second prize and $5,000 in prize money. While re:3D, Inc has a guaranteed seat at the Finals in San Antonio, Tx this November, the other competitors still can earn a wild card spot!

USAA’s Randy Termeer opened events, making clear USAA’s mission is to see the pitching participants go from “service, to startup, to success.” The event also featured a fireside chat between USAA’s Neff Hudson and Evan MacMillan, the CEO of Gridspace, our host for the event. Gridspace is an innovator in machine learning technology, focused on voice applications in customer care and service sectors. Together, Hudson and MacMillan discussed the ups and downs of launching a new business, dealing with corporate clients, and creating the right culture. They also discussed staying determined, flexible, and open to new solutions in the face of rapidly shifting market landscapes.

Want to Be on Stage Next?

Pitching under ideal circumstances is difficult, but pitching for a competition is even more intense. Take another look at your pitch with Bunker Labs How-To Pitch Your Business blog series!

Judges will hear business pitches from six US military Veterans or eligible family members. Each competitor has just five minutes to make their pitch, followed by a five-minute Q&A with the judges. 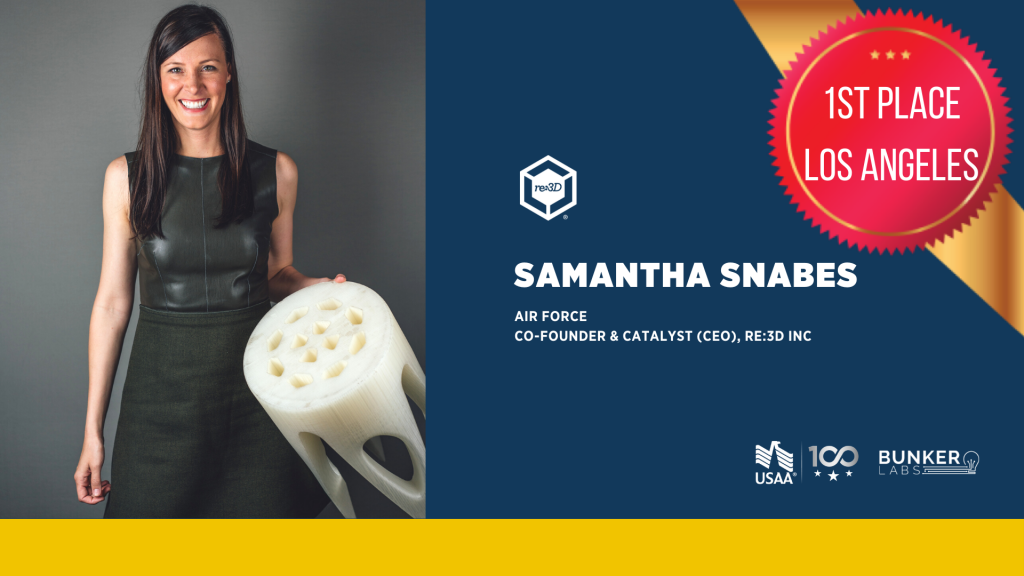 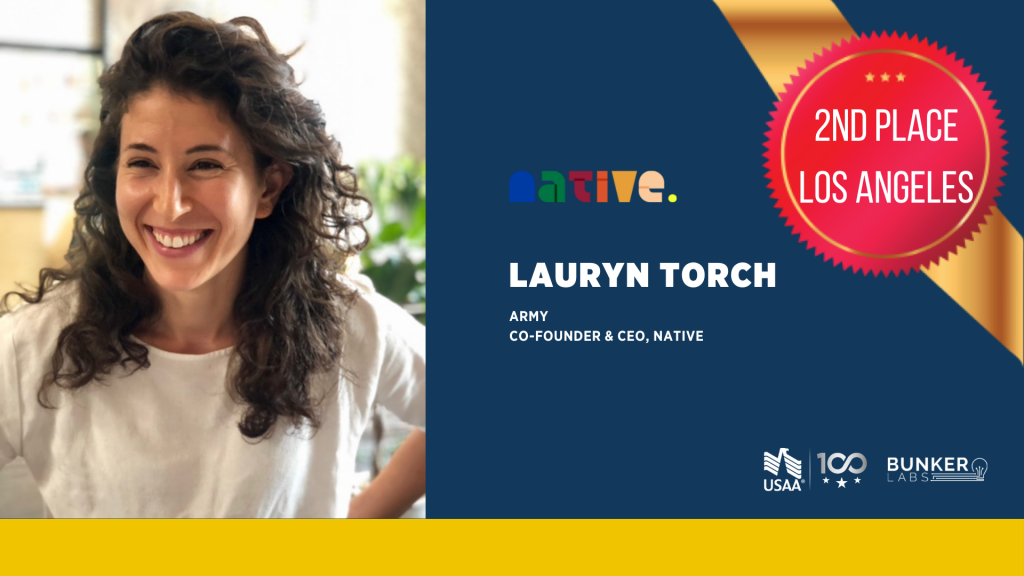 Native is a multilingual messaging platform that uses artificial intelligence (AI) to enable organizations to communicate with stakeholders across more than 100 languages, in real-time. Native helps businesses overcome language barriers in interactions with customers, vendors and employees and turns translation into a competitive advantage. In addition to surfacing the most premium translation in the marketplace, Native captures and analyzes multilingual interactions and alerts organizations to risks and opportunities across their business, all in a secure environment. 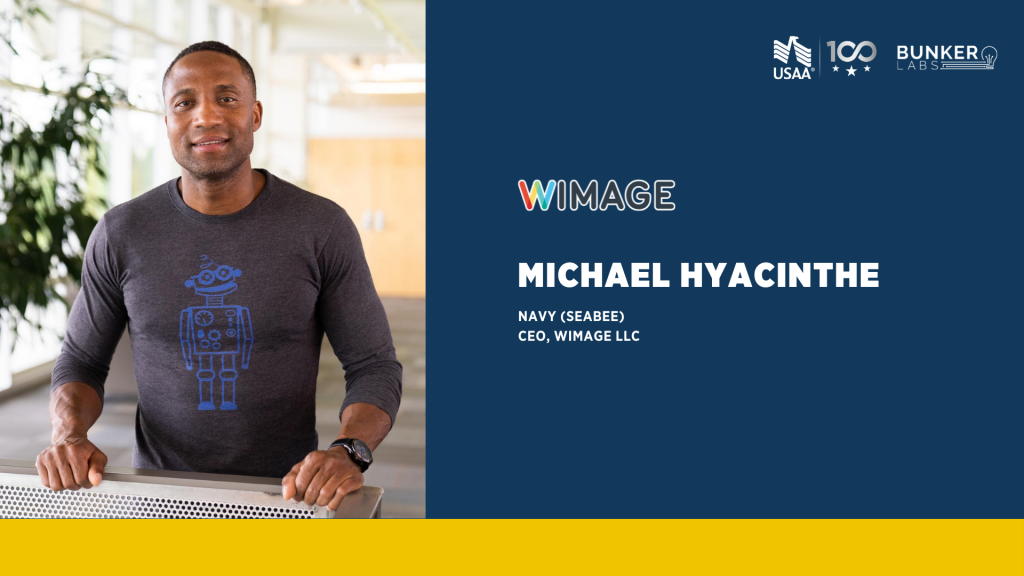 Wimage is a children’s technology and media company creating fun, interactive and educational content for TV, Apps, print, and streaming platforms. Wimage encourages children’s storytelling through innovations and entertainment directly in schools and homes. Our interactive TV show, Wimee’s Words on PBS, brings kids into an interactive world where their imagination becomes a reality. At Wimage we’re turning content consumers into content producers and empowering a new generation of imaginative learners and creators. 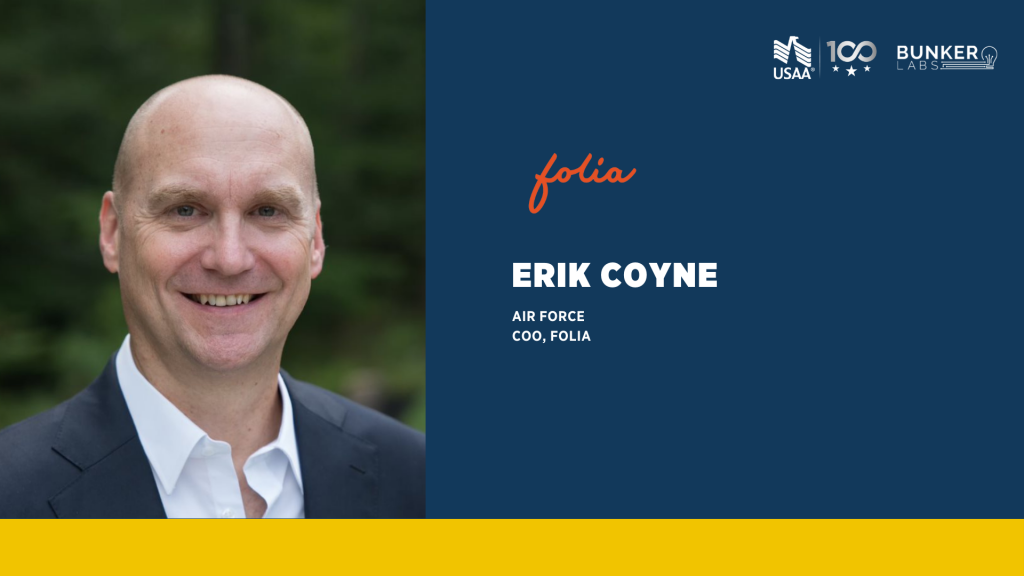 Folia is bringing a strong voice to your ideas — we are streamlining digital research and markup so you can securely share your insights with clarity and speed.

Folia is a software development company focused on business productivity solutions. Its SaaS platform, Folia, fills a critical gap in the modern workplace –there is no one place to collect, view, markup, and share documents. We have a solid product foundation, validated the market opportunity, and bootstrapped $1M in annual revenue. We are currently raising a $2M equity investment to help accelerate our growth. 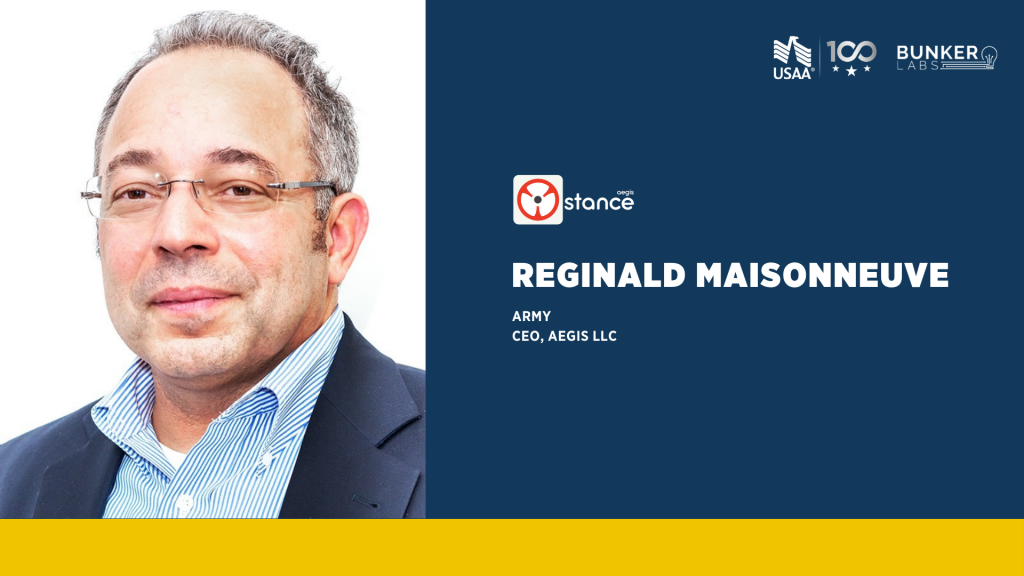 Aegis and its financial health platform, Stance, were created to protect and advance the financial and economic interests of consumers and SMBs and to provide responsible financial institutions with new means to profitably serve them. 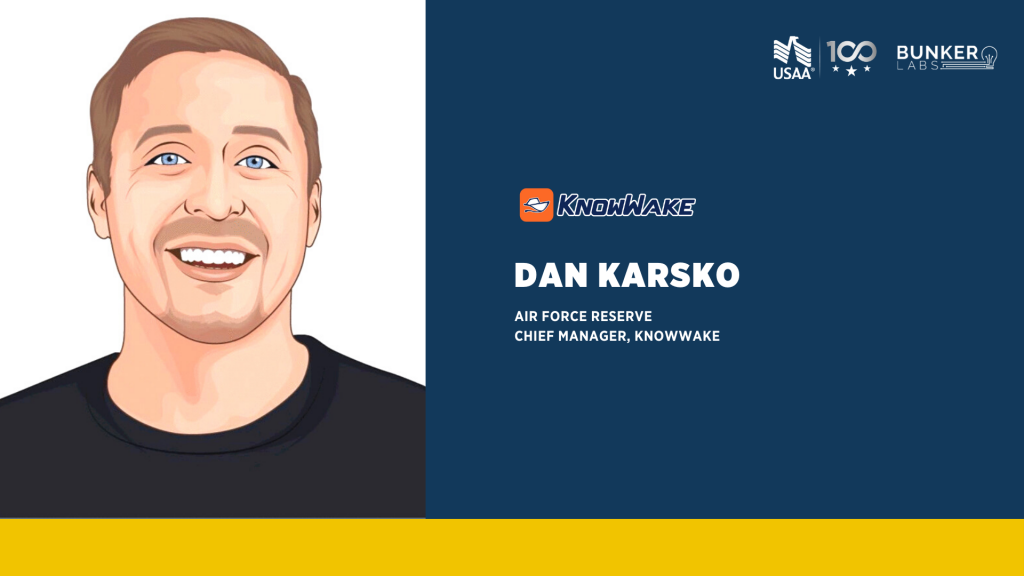 KnowWake is a platform dedicated to increasing safety, accessibility, and enjoyment to anyone on the water. Simply described as WAZE for the water with point-to-point navigation to over 40,000 destinations across the globe and easy, user-to-user communication functionality. Community members can find friends, create groups and share their location all from their mobile device.

Our judges have the unenviable task of listening to eight pitches and selecting a winner to take home $10,000 and a spot in the finals, as well as a runner-up, who takes home $5,000. 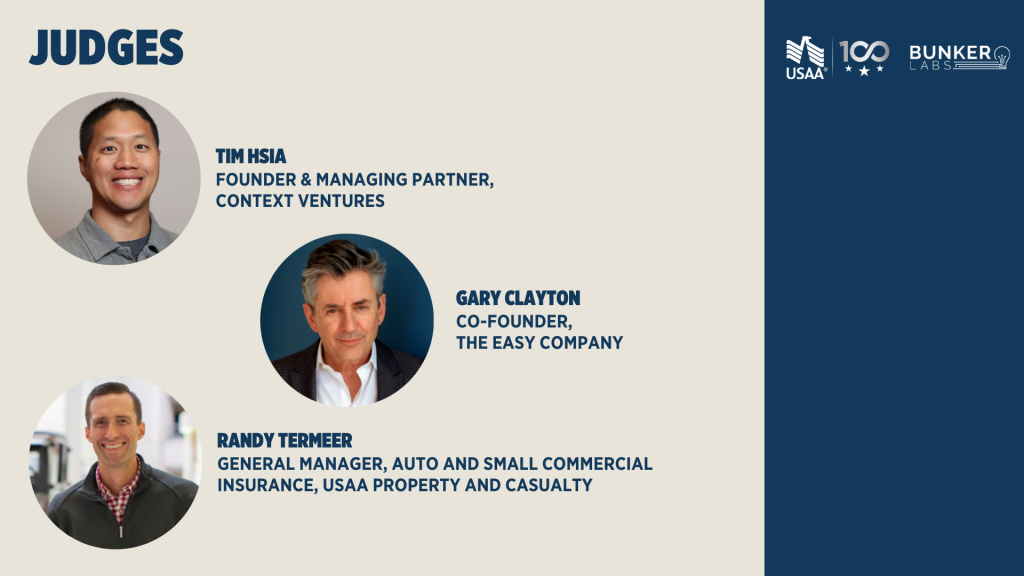 Tim Hsia is a distinguished honor graduate of West Point and was commissioned as an infantry officer in the US Army where he deployed twice to Iraq. Tim transitioned from active duty in 2010 and graduated from Stanford’s Graduate School of Business and Stanford Law School in 2014.

Tim is the CEO & Founder of Media Mobilize (an online ad network, marketing agency, and media company). He started the company in 2016 and bootstrapped the company. The team has 30 team members and hires veterans and military spouses.

Tim is the founder and Managing Partner of Context Ventures, a venture fund that invests in consumer startups and in military veteran founders. Tim’s startup investments include Workflow (acquired by Apple), Morning Brew (acquired by Business Insider), The Hustle (acquired by HubSpot), Vicarious Surgical (SPAC), and Proterra (SPAC).

Tim is a board member at Service to School (co-founder) and the Marine’s Memorial Association (Marine Memorial Club and Hotel in San Francisco).

Over the course of his career, Gary has been involved in building some of the most innovative products in the enterprise, media, and consumer industries

Gary is currently co-founder of The Easy Company, a company humanizing the web3 experience. Before co-founding The Easy Company, Gary was CEO of Owlcam and oversaw their acquisition by Amazon. Prior to that Gary was Chairman/CEO of Automatic having served for several years on their Board of Directors before assuming the Chairman/CEO roles. Gary oversaw the acquisition of Automatic by SiriusXM.

Gary currently sits on the Board of Directors of Gridspace (speech analytics). In the past he sat on BoD for Automat.ai, Xobni and Automatic. He also advises Directly (human-in-the-loop expert services) AnyRoad (experiential marketing) and UJET (multimodal customer care).

Previously, as Chief Creative Officer for Nuance Communications, Gary held a unique role that sat at the intersection of strategy, innovation and design. Spanning the mobile, healthcare, consumer and enterprise markets, Gary’s team interpreted technology trends through a design lens to create next- generation user experiences. While at Nuance, Gary had been instrumental in creating Nina (2013 USAA Strategic Supplier Innovation Award), Wintermute, DragonTV (Technology/Engineering Emmy award), Dragon Reader, Dragon Go (Time Magazine Best Apps of the Year) and Dragon Dictation for iPhone (Apple’s App Hall of Fame, Time Magazine Best Apps of the Year). His team also oversaw the creation of the voice of Siri for Apple. Additionally, he oversaw the development of speech systems and mobile applications for large enterprises such as USAA, Bank of America, Fidelity, FedEx and many others

Randy Termeer is the interim President of USAA’s Property and Casualty Group. He joined the company in 2017 as the General Manager of the Auto and Small Commercial Insurance lines of business for the company. He also is the Chair for USAA International Limited and Societe Anonyme, serving our members’ insurance needs abroad.

Prior to this role, Randy served as Chief Operating Officer for Chubb Overseas General Accident and Health, leading Underwriting, Actuarial, Technology, and Operations for their 50-country portfolio. Since 2001, Randy has had the opportunity to work in a variety of Property and Casualty leadership roles, focused on Product Management, Underwriting, Actuarial, and Predictive Analytics.

He serves as the Honorary Commander of the Lackland 37th Training Wing and sits on the Board of the Insurance Industry Charitable Foundation, Southeast U.S. Division. Randy also served on the Board of the Insurance Institute for Highway Safety, an independent, nonprofit scientific and educational organization dedicated to reducing the losses — deaths, injuries, and property damage — from motor vehicle crashes.

Randy earned a master’s degree in Business Administration from Western Michigan University. He also completed international baccalaureate programs at the University of Edinburgh.

Outside of work, Randy enjoys a host of activities with his family, including snow skiing, coaching baseball, and fly fishing. He’s an avid motor racing fan, which fuels his passion for the Auto insurance industry. He’s been married to his wife Lisa since 2003 and they are the proud parents of four children: Cecily, Liam, Colette, and Corinne.

Want to Pitch Your Business?

Remember, applications are open for the Chicago Regional Pitch Competition until May 2nd. Apply today or fill out an interest form for future regional events in Seattle, and Charlotte to take your shot at $100,000 in funding!