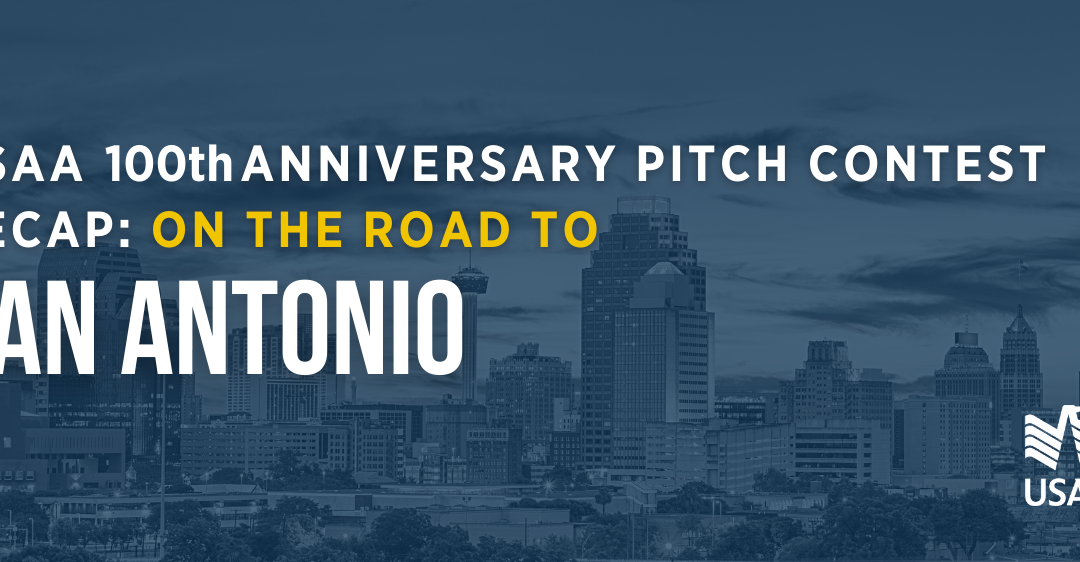 In 1922, a group of soldiers founded USAA by joining together and insuring each other’s vehicles when no one else would. After 100 years, their founders’ innovative spirit continues to be a driving force. This is why USAA is celebrating its 100th anniversary by looking for the next generation of entrepreneurs who can carry the spirit of service-minded innovation into the next century. To help, Bunker Labs and USAA are teaming up to award cash prizes and support new ideas from the military community.

As many as 36 startups will compete in a series of regional pitch competitions held throughout 2022, culminating with the final event in San Antonio in November. The winner from each regional event will be invited to pitch at the finals alongside four wildcard invitations selected from the regional events.

Let’s look at what has happened so far…

Our first regional pitch competition was in Austin, Texas on March 24th, where eight companies competed for $10,000 in regional prize money and their spot on the road to San Antonio! Kevin Goldstein and Fluid Intelligence beat out 125 other Austin applications to take home the top prize of $10,000 after a long deliberation process by the judges, who were torn between several top performers.

“To be accepted and win here is tremendous. The support and encouragement from Bunker Labs and USAA can’t be underestimated. Their support in putting together a program like this, an opportunity to pitch to actual potential users, it really is priceless.”  – Kevin Goldstein, CEO of Fluid Intelligence

Sergio Rodriguera Jr’s. Straylight Systems took the second prize and $5,000 in prize money. Judges were keen throughout the competition to suggest connections for all the participants, and the crowd seemed eager to connect and do the same. While Fluid Intelligence has a guaranteed seat at the Finals in San Antonio, the other competitors still can earn a wild card spot!

On April 21st, the road to San Antonio went through Los Angeles, California, with the second of six regional pitch competitions. Samantha Snabes and re:3D, Inc beat out 75 other Los Angeles applications to take home the top prize for their industrial 3D printing venture with an eye toward sustainability. Her victory came after six pitches that judges described as strong, crisp, and from a diverse range of industries.

Lauryn Torch’s Native multi-lingual messaging platform took home second prize of $5,000. Native helps businesses overcome language barriers in interactions with customers, vendors and employees and turns translation into a competitive advantage. In addition to surfacing the most premium translation in the marketplace, Native captures and analyzes multilingual interactions and alerts organizations to risks and opportunities across their business, all in a secure environment.

Our third of six regional pitch competitions was held on May 26th in Washington, D.C., hosted by ID.me. This time eight companies competed for the top regional prize. Michael Chiaramonte and Duality Systems, Inc beat out 120 other Washington, D.C. applications in his bid for the top spot with their scheduling software aimed at streamlining military and health care operations.

Duality beat out seven other participants, but each pitch had judges engaged and offering one-on-one feedback at a later date. It also led to great networking connections for all participants. James Chapman’s ClaimEdge insurance claim litigation management software took home second prize and $5,000 in prize money.

The D.C. event also featured a fireside chat between Moonshots Capital CEO Kelly Perdew and Blake Hall, the founder of ID.me, our host for the event. ID.me is an innovator in the field of online identity protection, enabling users to safely access government, healthcare, and financial services online. They’ve already collectively saved real people millions of hours at the DMV updating their existing government ID to a Real ID. Together, they discussed the importance of making sure the people you hire at the entry level are represented by those in leadership to protect morale and company culture. They also discussed the importance of staying focused on end-user pain points not just on your product, but your value propositions, business metrics, and everywhere else.

The next stop on the road to San Antonio was Chicago, where Clark Yuan and Candelytics beat out all the other Chicago applicants. They took home the top prize for their dual-use SaaS company’s digital platform to visualize, analyze, and share 3D data over the web. Gabriela Bell and Organized Q’s virtual executive assistant software earned second prize and $5,000 in prize money.

The event also featured a fireside chat between Snapsheet CEO, Founder, and Chairman of the Board Brad Weisberg and Henriette Fleischmann, the COO of Hosta A.I. property assessments. Snapsheet was our host for the event, and is an innovative SaaS appraisals and claims management software that uses machine learning to streamline the process online. Together, they discussed the importance of finding the balance between the confidence to block out negative noise versus the alertness to listen to the market and pivot with shifting market forces. They also recognized that launching companies is a marathon, not a sprint, and shared thoughts on avoiding overly stressing over the quality of early clients, setting smart KPIs, finding internal champions, and making key hires.

Our fifth regional pitch competition was in Seattle on July 21st, where Kris Sandor and Readyly won first prize for their SaaS AI-powered customer support solution. Bill Bruner and New Frontier Aerospace’s hypersonic international green air carrier was the runner up and scored $5,000 in prize money.

Zenledger COO Greg Adams and Neff Hudson, Vice President of Corporate Development for USAA, also joined the event for a fireside chat. Zenledger helps crypto investors file their taxes with software that connects to over 500 different cryptocurrency and NFT exchanges to make filing easy. Together, they discussed Greg’s journey from Army Special Forces and Afghanistan to Harvard Business School, and how both equipped him to surround himself “builders” to launch, run, and sell his entrepreneurial ventures. There was also some discussion on the recent fall of the Afghani government, and how Greg Adams helped an interpreter his unit used during his time in country flee retaliation for assisting, alongside many others.

The event also featured a fireside chat between Army National Guard veteran and founder, and former CEO of goodmortgage.com Keith Luedeman and USAA’s Executive Vice President and Chief Strategy & Brand Officer Ameesh Vakharia. Together, they discussed the strength of entrepreneurial peer networks for problem solving and troubleshooting, something we do a lot of in the Bunker Labs community. There was also some discussion on seeking customer revenue and going beyond good ideas to design products and services customers are willing to spend money on, and how that’s preferable to investor dollars. A big takeaway was getting your product out at any level, failing, learning, and improving tends to be a more successful model than waiting on third-party investment dollars.

Stay tuned to learn which four competitors will join our six finalists on the road to San Antonio!