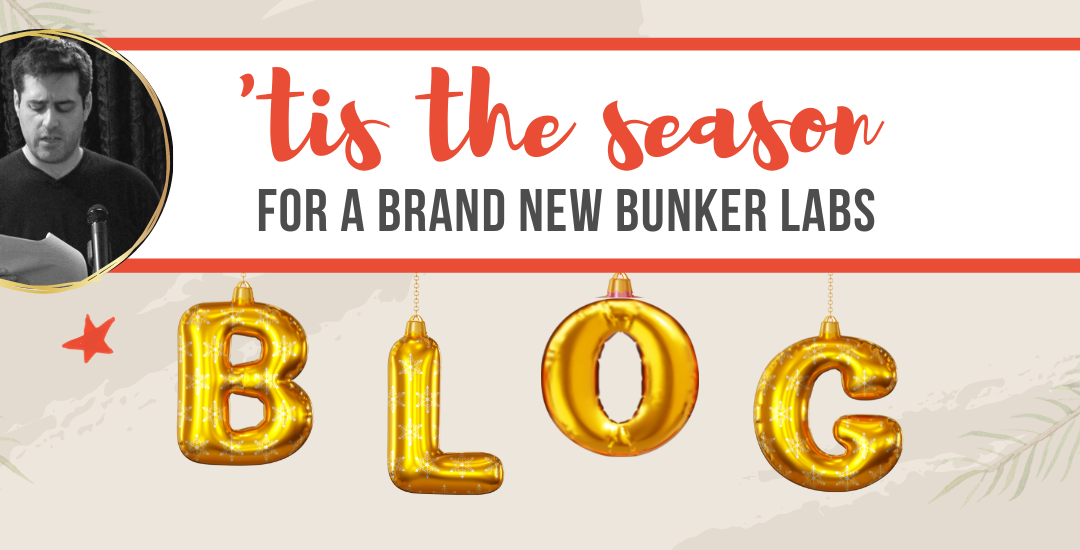 New year, new blog, am I right? To go along with our new website, Bunker Labs is adding more robust blog programming. So, I just wanted to take a moment to respectfully introduce myself and welcome you all to the new official blog of Bunker Labs.

My number one goal is to deliver thoughtful, meaningful content you look forward to reading. I want to produce content that you find inspiring, educational, or that serves to build connections between you and other entrepreneurs within the Bunker Labs community. Everything I plan to post here aims to accomplish one or more of those goals.

If that sounds familiar, it’s because the Bunker Labs mission is to inspire, equip, and connect Veteran and military spouse entrepreneurs. While Bunker primarily accomplishes this through its major programs, (Veterans in Residence, CEOcircle, and the Ambassador Program) the blog, to be successful, has to play a role in that three-fold mission. So, to that end, let me give you a sense of what we’re planning to deliver.

Certainly, the blog exists to inspire you. One of our major recurring blog segments will be the Entrepreneur Spotlight, which showcases an entrepreneur that completed one of Bunker Labs’ programs, and tells their story. These stories are here to let you know that other people in your position are doing it and finding success. They show that for at least some entrepreneurs that were once in your position, the disciplined effort can pay off, and encourage you to take a moment and reflect on how your journey mirrors theirs.

The blog is also well-suited to equip you with knowledge necessary for today’s entrepreneur landscape. We have several planned recurring blog segments aimed at providing education, and the one you’ll see right away is the How-To segment. We’re leaning on our vast community of experts among Bunker Labs’ leadership to provide a steady stream of how-to blogs, giving you real steps to walk you through a single business-related process or fine-tune one aspect of operations.

We also want to connect you all to each other, creating opportunities for you to engage in online discussion. We’ll have opinion pieces from experts in the field that encourage conversation on our social media platform, Bunker Online. You can also expect a variety of pieces that don’t neatly fit into one of these categories.

I’m Keith Kappel, and I’ll be acting as the managing editor and primary contributor to the blog. As managing editor, I’ll have an outsize influence on what sort of things we post, so while I don’t want to dwell on myself for too long (Bunker Labs isn’t about me, after all, it’s about serving and supporting our entrepreneurs), I think it’s worth letting you all know who I am and what life experience I’m bringing to the editorial table.

The short version? I’m a Navy Veteran and freelance writer. I also grew up in an entrepreneurial environment and run a couple micro-businesses.

Just after high school I enlisted and served as a Naval Intelligence Specialist from December 1997-September 2001. I went through bootcamp at Great Lakes, and then went down to sunny Virginia Beach for Intel school, spending marches to and from class enjoying training flight flybys from NAS Oceana’s F-14 squadrons. One of my first assignments in class was to give an unclassified Intelligence briefing to practice our presentation skills. My “Star Wars Episode 1 Casting Rumors” briefing elicited rounds of giggles from my teenage shipmates, but I had the last laugh after graduation when I saw my orders: Naval Space Command, Dahlgren, Virginia.

While awaiting my security clearance in Dahlgren, I spent a few months working at RESIC (Remote Earth Sensing Information Center). There, we printed false-color imagery for military units, usually using non-classified LANDSAT and SPOT satellite imagery. When my clearance came through, I finally moved over to Naval Space Command’s Intel shop, where I served as the daily Intelligence briefer for the N2 and his staff, and the weekly Intelligence briefer for CO Admiral Zelibor and his staff.

Just over halfway into my enlistment, I got orders to transfer to the USS Theodore Roosevelt (CVN71) in Norfolk, VA for their workup cycle. While aboard, I made 2nd Class Petty Officer (E-5), and decided to apply for an educational early out, a program that would move up my separation date by up to 3 months to help sync my separation with my chosen college’s semester start date. They changed by EAOS from December 01 to 10SEP01.

After an honorable discharge, I slowly chipped away at my Associates in the Arts from College of DuPage while falling into a bartending career. I had been writing since 2005 as a hobby, mostly geeky Star Wars fan fiction, comic books, and tabletop gaming supplements. Sometime around 2009, during a particularly heated paintball match between rival bars, I broke my leg, and went back to college primarily to cover my rent with GI Bill income until I could literally got back on my feet and behind the bar.

Since I was only going to college to cover rent, I decided I’d just take something I actually enjoy. I got my associates in a single semester, and then transferred to Columbia College Chicago’s creative writing department. College at 30 is a vastly different experience from college as a teenager. I loved going to class, I loved doing my homework, and I loved learning about my chosen field.

Over the next 6+ years, I wrote something like half a million words for FFG, much of it in the Star Wars setting. While work has been thin during the pandemic (supply chain issues, an unfortunately-timed corporate reshuffling, and work-from-home growing pains), I followed my editors from FFG to fellow subsidiary Edge Studio, and continue to write about the galaxy far, far away.

I grew up in an entrepreneurial household, like my father before me. His dad (a WW2 Army Veteran) owned a small chain of Chicagoland bakeries that swelled to four locations until my father took over. Unfortunately, local grocery stores switched to pre-packaged bakery goods from giants like Entenmanns instead of using local bakeries, scooping my dad’s largest accounts. Dad adapted, selling fresh pastries to restaurants for their dessert menus, but the bakery shrank year after year, until my dad shuttered the business.

My dad turned to selling health and life insurance, working for Prudential. Most people who get into insurance sales market to their friends and family, last a couple of years buried in paperwork, and then live off the renewals, slowly growing their book of business as they meet people, or move on to a different industry. My dad innovated.

Then, one of the first things he did after landing a whale (what he called a big life insurance sale) was hire administrative help to clear the paperwork off his desk. My dad’s instinct was to dedicate as much of his time as possible to doing the part of his job that only he could do and that drove revenue, and farm out as much of the rest as possible. Winning “rookie of the year” was followed by multiple regional and national sales awards (ranking in Prudential’s top 10 regularly for life insurance sales). Eventually, he parted ways with Prudential to operate as a free agent, and eventually opened his own brokerage.

I tell you all this so you understand, growing up, I was always encouraged to look for the “low-hanging fruit” that was ignored by others or uniquely easy for me to access. Another way of saying that is, I was raised to seek out opportunity and then blaze my own trail to take advantage of it. When I faced a problem, I was taught to examine it from multiple angles, including taking a moment to see if there’s a business opportunity hidden in the issue.

When I was 15 and decided to serve in the military, one of my primary motivations was to pay for my own college and continue to invest the college fund my dad was growing for me. With nearly an extra decade of investment of a $50,000 fund, given how tech stocks were booming in the 90s, we thought I’d graduate college with somewhere between a quarter and half a million dollars in seed money to open a comic book store.

While the 90s dotcom bubble burst that particular dream, as a freelance writer I’ve kept the family entrepreneurial spirit alive. Freelancing in of itself requires some degree of entrepreneurial insight to find success. Since my first job on a Star Wars book, I’ve had to talk my way onto future jobs with that client, handle my own accounting, and 1000 other tasks that most nine-to-fivers don’t have to worry about. I also had to brand and sell myself, talking my way onto future jobs, interviews, and podcast appearances.

My writing career has spawned two microbusinesses I run with some part-time help (to clear away the paperwork like dad taught me). One is a self-publishing business, called High Metric Games. We publish original rules and setting supplements using an open license version of the same rules used in the Star Wars game my fanbase knows me from. The other is the Adventure Writing Academy, a yearlong online school that teaches students how to write genre and tabletop gaming content at a professional level.

I share all this so you know I have lived hustle culture, juggling multiple jobs and small business ideas. I want you to know that I do have an idea of what you’re going through. I know how exciting the prospect of a new idea can be, and the seemingly limitless well of energy that can create in you. I know the fear of uncertainty during some of those early years when you wonder if you’ll make rent on time. I know the despair of recognizing something fundamentally isn’t working, and you need to go back to the drawing board. I know how exhilarating it feels when you work so hard to get that one big client, and when you finally get that “yes”. I also know how terrifying it is five minutes later, when you realize that now, you have to produce.

Entrepreneurs have an exaggerated experience of professional life, with higher highs and lower lows, and more frequent swings between the two. It takes a special, resilient kind of person to thrive under the stress of frequent setbacks and surprises with so much on the line. I think it’s important you all know that I’ve experienced that life first-hand, and I know how to put those experiences into words.

That said, it’s hard to gauge how we’re doing unless we include you in the conversation. So I also look forward to adjusting my efforts based on your feedback, comments, and emails. This blog is for you, and it belongs to you, and I invite you share your thoughts on the blog with us at Bunker Online, on any of the Bunker Labs social media outlets, or even via email.