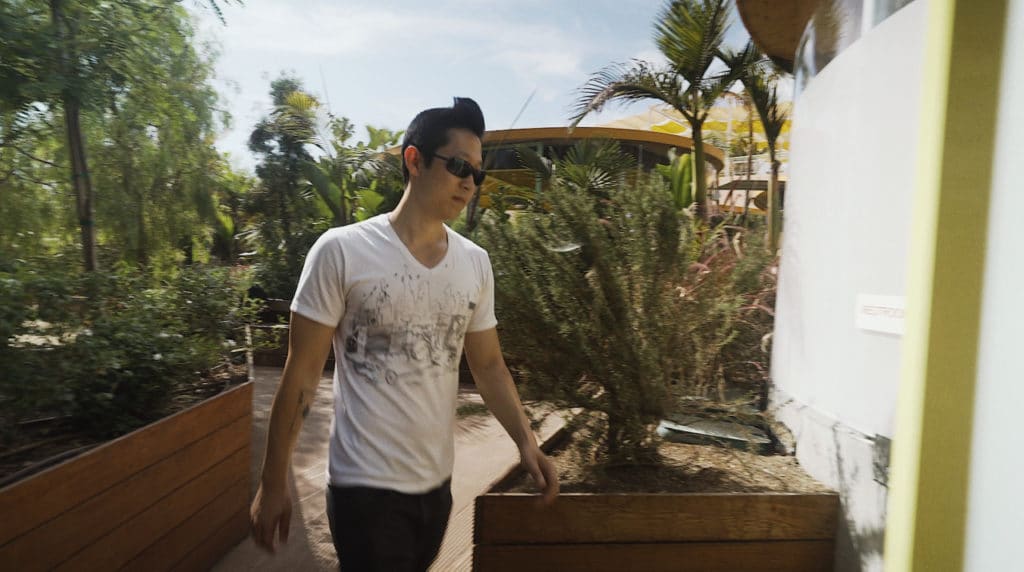 I met Paul Jun outside of a WeWork on a chilly but sunny weekend morning in downtown LA. We are meeting to film a documentary covering the company Paul started called Filmocracy, the world’s first and only gamified movie streaming platform. Paul stands with the perfectly balanced posture of a former Air Force officer, but carries a demeanor that is relaxed and friendly; like that of a gamer, he has a glimmer of sarcasm in his eye. From the beginning, you can tell he is very intelligent. After rummaging around his new Veterans in Residence office space, provided by Bunker’s partnership with WeWork (shameless plug), Paul and I settle down to begin the interview. Paul jumps right in: “So there is a supply problem with independent film, you know, production and financing.”

I adjust the audio levels. As a filmmaker myself, I’m hooked.

“Now there are a lot of people who are very proficient in producing films. Equipment is cheaper, editing software is cheaper, talent is more accessible. But in terms of distribution and marketing, there’s nothing there. You know, you have YouTube and Vimeo for people at the very bottom of the barrel that are just trying to get people to watch their films. But if you’ve spent some real money making your film, the only real avenue for you to get any sort of distribution deal is to go to a festival. And there are thousands of festivals now. It’s become its own industry, but there are only a few that actually matter. You know, you have Sundance, Toronto film festival, Cannes film festival, but all of the local, regional, all those other ones, they don’t really help anyone get distribution.”

I vigorously take notes. He continues, “So you have all of these films being made – 50,000 films a year – that don’t have anywhere to go. And they don’t have any budgets to market with. You know, a lot of these filmmakers making the film took all of their money. Either they raised funds through Kickstarter or from family friends. So once they make the film, they’re just hoping that it’s good enough to get distribution somehow. But unfortunately, that’s not how it works. So Filmocracy is really about helping all of these people. We’re not saying that all of these films that get made are good. But there certainly are a lot out there that have somehow made something special, but they don’t have a big cast or a big budget, and unfortunately, that’s not going to get the deal done. So the question has always been, how do you get somebody to watch a film they’ve never heard of starring actors they’ve never seen before? … The only way to do that is through incentivization.”

This is the idea that birthed Paul’s company, Filmocracy.

Here’s how it works: Paul’s team curates hundreds of great independent films to the Filmocracy platform. Users join as an avatar. Then they start watching movies and get rewarded with a type of virtual currency called “popcorn.” They can exchange this for prizes or even actual cash every month, with a portion of their membership dues adding to their own pot. The key here is a review process that goes way beyond a simple thumbs up or thumbs down. Users rate movies based on several categories including:

For viewers, this is great because they can either watch something they know they’ll like based on ratings, or something that they usually wouldn’t watch, based on acquiring virtual currency. For filmmakers, it’s great because they’re directly compensated for the number of minutes that their films are viewed. Filmocracy’s Kickstarter campaign reached its goal of raising $50,000 with the promise of “generating trustworthy ratings for films [to] help other users figure out what to watch. Instead of having to google ‘What to watch on Netflix January 2019’, [potential viewers] can easily sort by ratings that are unavailable anywhere else.” In his Kickstarter video, Paul points out that, “As Filmocracy grows, we plan to allow users to invest their rewards in future projects of Filmocracy filmmakers. We think that we can create a self-sustaining community that supports independent film and pushes cinema to the next level.”

After the interview, we head over to Hollywood to shoot some footage of him for B-roll in the Bunker Labs Narrative. We find ourselves in some swanky new nature-themed coworking space where we talk about our need for more nature in our working lives, our dislike for military bureaucracy, his time as an Intelligence Officer in the Air Force, and the period after he quit his job as an executive producer to start Filmocracy. “There’s so much bureaucracy, you know, I think that’s where the turning point was for me where I wanted to get out and see how I can change the world in a way that I feel like I’m making a bigger impact.”

Paul and I say our goodbyes at a taco truck outside of the coworking space. “The best in town,” Paul notes, and the truck’s giant LED light repeats this claim. The owner knows Paul by name. As the two catch up about business and the like, I can’t help but entertain the thought, what if Filmocracy does gain traction? The platform is so unlike the current distribution models thaat we use today that I envision it causing a massive shift in the landscape of content creation and consumption. I think of how quickly the “like” or the “follow” caught on as a unit of measurement and how disruptive that has been since it was introduced. Coming from a niche background in experimental documentary media, a scene primarily confined to stuffy academic circles and metropolitan art galleries, I know all too well the need for new ways of reaching audiences. Despite the high demand for content in today’s economy, I have witnessed many filmmakers move away from the profession. They’re often lured towards better-paying careers after being unable to reach audiences that would’ve otherwise enjoyed their content had they been exposed to it. If Filmocracy does catch hold, I can see it changing not only the creative and financial lives of filmmakers, but also the perspectives with which the greater audiences see the world.

Listen to the full interview with Paul Jun on Episode 1 of the Bunker In-Depth Podcast below.