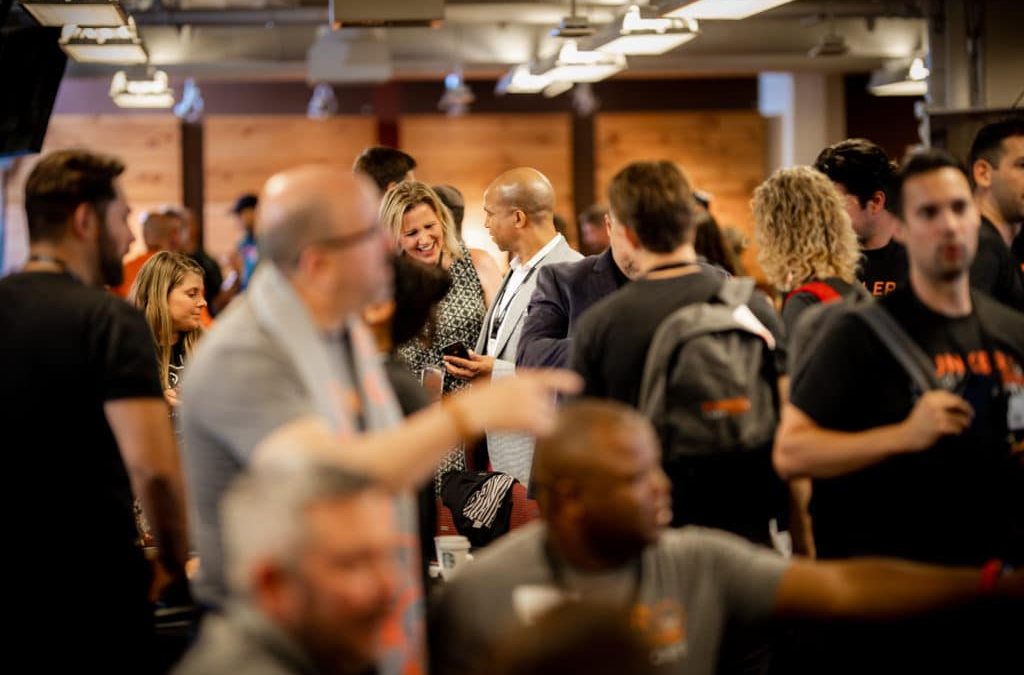 This month, Bunker Labs held its annual summit in Seattle where we celebrated five years since our launch in Chicago. The event comprised of an incredible two days of talks, panels, yoga, networking, and good food (including cricket jerky!). Along the way, we built many new relationships, discussed concrete methods to be better leaders, and renewed our excitement for the year ahead.

The summit kicked off on June 13 with a breakfast and networking session at Starbucks headquarters, the host of the summit. In addition to the great coffee and hospitality from Starbucks, the breakfast was the first time many city leaders from across the country met in person.

After breakfast, CEO Todd Connor welcomed us to the event.

Matt Kress, the senior manager of Veteran and Military Affairs at Starbucks, welcomed us to Seattle and helped get the day started off on a positive note with a hat tip to our design team: “For a company that knows a bit about branding, you guys have it going on.”

We met James Rolin from Bozeman, Montana and COO of Cowboy Cricket Farms, which James co-founded with his wife Kathy. He brought samples of his cricket products including cookies and whole roasted crickets. As one Bunker Labs staffer described her first experience with crickets, “I was really scared to try it, but when I tried it, it just kind of melted in my mouth. The flavor was there, like jerky.”

Check out the Narrative video we filmed with James, which we played at the Summit, here.

The attendees divided into breakout sessions covering topics such as how veteran service organizations can best help veterans and the value of the City Leader network, as well as Bunker Labs’ three-year strategy. In one breakout session, Anne Meree Craig, a Bunker Labs board member and the CEO and co-founder of COMMIT (a foundation dedicated to helping veterans transition from the military into meaningful civilian careers) and Michel Feaster, the CEO and co-founder of customer engagement software company usermind, had a conversation about leadership.

Thursday afternoon featured different entrepreneurs discussing their journeys. D’Shawn Russell spoke of her decision to quit her career as a math teacher of 22 years to begin making and selling candles. D’Shawn and her business Southern Elegance Candle Company won the Ford Fund Pitch Competition at the Raleigh-Durham Muster in 2019. D’Shawn talked about the support she received from strangers, even when her own friends and family were uncertain whether leaving her teaching career to make candles was really such a great idea.

One of our new board members, Bobby Herrera, inspired us with his story of growing up as the eleventh child out of thirteen in a Mexican migrant farm family. He introduced us to his new book, The Gift of Struggle, which he also handed out to all attendees. The book highlights his journey from childhood to joining the Army, building a business, and starting his own family. Each struggle he faced taught him a lesson he could apply when he faced future challenges and empowered him to become the leader he is today as CEO of the Populus Group.

The evening was capped off with a Bunker Brews networking session. The local news in Seattle ran pre-event coverage of the Bunker Labs Summit including an invitation to join for Bunker Brews, and about 200 people showed up to network with the veteran entrepreneur community!

The Bunker Brews included a fireside chat with Bob McDonald, the former US Secretary of Veteran Affairs and former chairman, president and CEO of Procter & Gamble. Bob spoke with Bunker Labs CEO Todd Connor about leadership.

The evening capped off with awards, additional food, drinks, and networking.

The next morning, Friday June 14th, many attendees woke up early to attend a yoga session.

The rest of the day included another breakfast and networking session at Starbucks Headquarters followed by regional breakout sessions covering topics like running a great Bunker Brews, ecosystem explorations, and market hurdles and opportunities.

At the end of the Summit, Todd remarked:

“It’s hard to express (though I suspect you are feeling it as well) the deep sense of gratitude I feel for our time together in Seattle.  It was all the feels for me: I was inspired by the stories of the entrepreneurs we are supporting, intellectually challenged by the conversations I had with many of you, elevated by the remarks on leadership by Bobby Herrera, Michel Feaster, and Bob McDonald—all while leaning into this tribe of change agents and family from 26 cities across the U.S. committed to helping active duty, military veteran, and military and veteran spouses start and grow their own businesses.”

In the last year, we’ve been laying the foundation for expansion and in the next year you can expect us to grow our national footprint significantly. If there isn’t currently a Bunker Labs chapter in your area and you’re interested in getting involved as a potential city leader or partner, please reach out.

We couldn’t put on a summit like this without the support of our partners. Thank you to Comcast, Boeing, BusinessCents, USAA and LivePlan for helping us celebrate five years of Bunker. We’re grateful to Starbucks for hosting our summit at their national headquarters in Seattle and to our national sponsor JP Morgan Chase for its continued support of Bunker Labs.

One last note: One of JPMorgan Chase’s employees attended both days of the Summit and was elected to the Bunker Labs board. We’re excited to form a deeper relationship with Nikki Atkins Hartung, Regional Director, Southern California Region at JPMorgan Chase.

In 2020, the Bunker Labs Summit will be held in Chicago, and as we wind down from this year’s festivities, we’re already excited to reconvene. If you’re a member or supporter of the Chicago veteran entrepreneur community, we hope to see you at the Summit’s Bunker Brews!