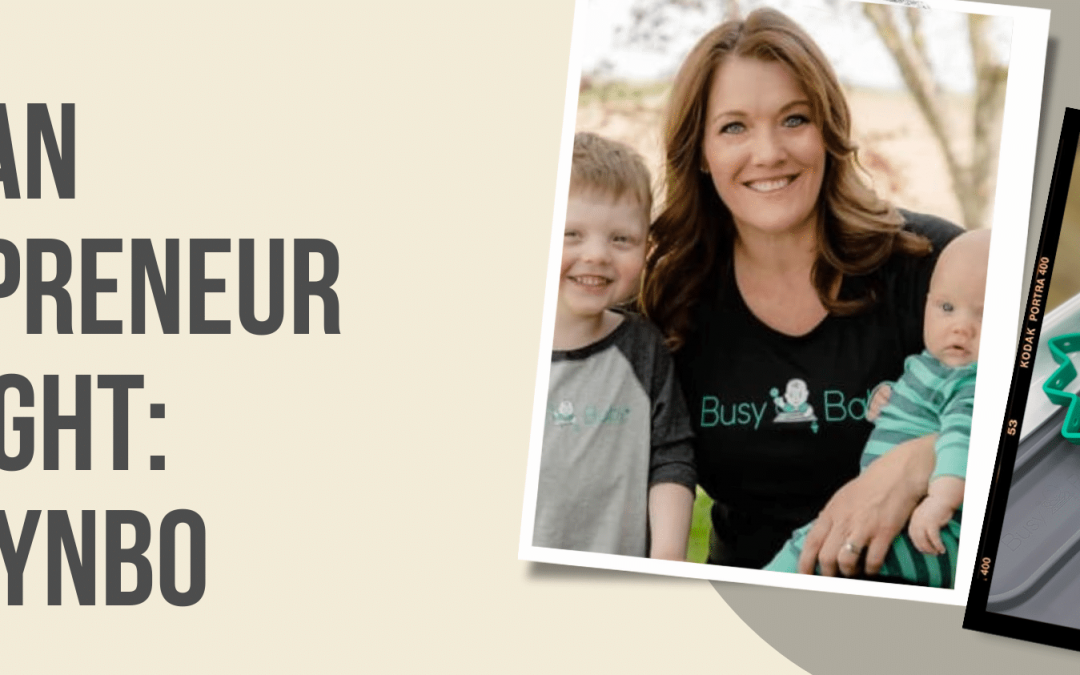 It all started with a baby throwing a tantrum.

Beth, an Army veteran, was out having lunch with some mom-friends, and their little ones were doing what infants do at restaurants—wreak absolute havoc. Toys meant to keep them occupied got dropped under the table, and even tossed into the path of unsuspecting patrons. Beth was somewhat annoyed at the experience.

It all seemed exhausting to Beth, whose own newborn, Christian, wasn’t too far away from shifting family restaurant trips into the “can we get a highchair” phase. The best-case scenario is a few toys get lost or left behind, or she’d spend half the meal fishing under the table for a now-dirty teething toy. Worst case, she’d be apologizing to a nearby table after that tossed toy ends up in their soup bowl. And even if none of that happens, there’s a good chance baby is going to start screaming and wailing for the just-dropped toy.

Determined to have an answer, Beth searched the internet for a product to combat dropped and thrown toys while out, but came up empty. If she wanted a solution, she was going to have to create her own.

She might not have realized it in that moment, but when Beth decided to create her own fix, she took the first steps toward running a multi-million-dollar business selling thousands of her Busy Baby play mats, fueled by personal appearances on Shark Tank and deals through Good Morning America’s website.

Beth’s minimum viable product (MVP) was a simple silicone pet food mat with glued-on suction cups and fishing tethers to anchor toys to the mat. She made a few for herself and her best friend, whose child was only a week younger than Christian, and afternoons out with the kids got a bit more manageable. The tethers kept thrown toys connected to the suction-cupped mat, keeping everything within the infant’s reach. No more crawling under the restaurant table, no more thrown toys, and at least a little less crying.

It wasn’t until her friend relayed a horror story about forgetting the mat for a dinner that Beth thought her little baby mats could become something more.

Before she was CEO of Busy Baby, Beth was Staff Sergeant Fynbo in the US Army. She served 10 years, working in two very different roles. Her initial MOS was 98G, a linguistic Electronic Warfare role in Bosnia where Beth learned Russian and Serbo-Croatian.

After her deployment, Beth reclassed into the 46R MOS, taking on a new job as a public affairs broadcast journalist stationed in Italy. She deployed to Iraq right after 9/11, serving as an embedded journalist in a warzone. After, she separated with an honorable discharge. Busy Baby is a certified Service-Disabled Veteran-Owned Business Enterprise (SDVBE).

Beth found out about Bunker Labs from an Army buddy working with Hire Heroes USA. At the time (January 2018), Bunker Labs ran a 12-week in person Launch Lab program (a precursor to our Veterans in Residence program). Beth drove about 75-miles into Minneapolis every Wednesday for three months, learning best practices and strategies to launch her business in the competitive baby care market.

One of her Bunker Labs instructors was also a professor at University of Minnesota, and encouraged Beth to participate in the school’s MN Cup Pitch Competition. Beth competed in 2018 (semi-finalist), 2019 (won $25,000 as the best veteran-led startup), and then came back in 2020, where she took home $25,000 for winning her division, $25,000 as the top woman-led business, and $5,000 as the best Southern Minnesota-led company, bringing home nearly six-figures in seed money between her three MN Cup showings and some smaller pitch competitions.

The funds helped Beth secure patents and refine her design. She improved the tether to better comply with safety standards, and found an array of new uses for her product outside of meals. It can suction cup around baby-carrier handles, dangling tethered toys like a mobile for younger babies, and can stick to the refrigerator or the shower wall to make bath-time more manageable. The Busy Baby mat wasn’t just for the “highchair” phase anymore, it’s a necessity for the first few years of parenting.

“If I hadn’t participated in the Bunker Labs program, I probably wouldn’t be in business at all. Going through Bunker Labs gave me the knowledge, resources, and confidence to keep taking baby steps forward.”

Beth started selling her product at expos in 2019, renting booth space and generating nearly six-figures in revenue. In 2020, the pandemic forced Beth to pivot from continued convention sales as well as a plan to expand into regional retail locations. Instead, she invested in Facebook advertising. While her first $1000 campaign had zero conversions, she tried again, hiring a specialist. Beth credits that campaign for driving Busy Baby’s 900% growth over the year, going from about $100,000 in sales to $900,000.

In March of 2021, Beth appeared on the popular ABC show Shark Tank, thanks in part to contacts she made through Bunker Labs. While she walked away from a deal offered on the show, free press opportunities in radio, in print, and online in the wake of her TV appearance contributed to even more explosive growth. Beth has since added new products and mat accessories like her new teething spoon, and has even begun selling third-party products in her Busy Baby online store.

Busy Baby currently projects it will close out 2021 with well over $5MM in revenue.

Launch Lab Cohort was a precursor to Veterans in Residence which is a partnership of WeWork and Bunker Labs. It is an incubator and leadership program that provides entrepreneurial community, business connections, and co-working space to help military veteran and military family members launch and grow their businesses.

Cohorts meet twice a year starting in January and July. Applications are open several months before each cohort starts. Learn more about the Veterans in Residence program.

Keith Kappel is a Veteran Naval Intelligence Specialist who served at the turn of the century. Currently, he serves as a staff writer at Bunker Labs, writing to benefit Veteran and military spouse entrepreneurs. He also works as a freelance writer, largely in the tabletop gaming space on major licensed Intellectual Properties like Star Wars and other fictional worlds. Keith also co-founded the Adventure Writing Academy, so when he’s not writing, he can teach others how.